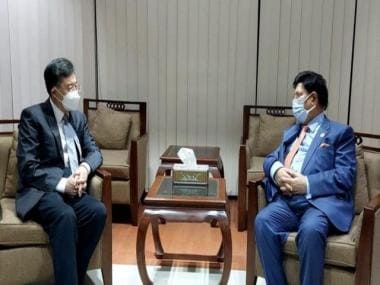 Dhaka: Newly appointed Chinese foreign minister Qin Gang, who was on his eight-day official tour to Africa, made a surprise stop in Bangladesh where he met his counterpart Abul Kalam Abdul Momen at an airport in Dhaka.

In a statement, Ministry of Foreign Affairs of the People’s Republic of China said, “Foreign Minister Qin Gang had a brief meeting with Bangladeshi Foreign Minister Abul Kalam Abdul Momen at an airport in Dhaka during a technical stopover on his way to visit Africa.”

“The two sides spoke highly of the friendship between China and Bangladesh, and agreed to strengthen exchanges in the new year and jointly work for new progress in bilateral relations,” the statement added.

According to Bangladeshi media report, Momen received his Chinese counterpart upon his arrival at around 1:58 am. Both the leaders spoke for less than an hour, with Qin departing at around 2:50 am. The duration of the visit suggests urgency in another way as the meeting at the airport came in middle of the night.

China did not reveal much about the meeting but talking to media, Momen said during the meeting, he raised the widening trade gap with Beijing.

As per reports, every year, Bangladesh imports around $13 billion worth of goods from China, while its exports to Beijing remain below $800 million.

Over $12 billion deficit is of a major concern for Bangladesh considering the shaky condition of its foreign exchange reserves amid the global economic turmoil sparked by the Ukraine war.

The Bangladeshi minister also highlighted about China’s unfulfilled promises during his meeting with Qin. He noted that Chinese President Xi Jinping during his Dhaka visit in 2016 made several investment pledges that have not materialised yet.

Momen also stressed on a previous agreement to remove duties and quotas on 98 per cent of Bangladeshi goods has not been implemented.

Bangladesh, which is one of India’s neighbouring nation, has for long been seeking a resolution to the Rohingya refugee crisis. As per reports, since 2017, more than 1 million Rohingya refugees from Myanmar are currently living in camps near the Bangladesh-Myanmar border. The Rohingyas moved to Bangladesh after Myanmar’s military launched a genocidal campaign against them.

During the meeting, Momen sought “special measures” from China to resolve Rohingya issue in their country. Notably, China is one of the foreign governments closest to the new military junta.

According to a report by Dhaka Tribune, Memon told Qin: “The Bangladesh Foreign Minister sought special measures from the Chinese side so that the problem could be resolved as soon as possible.”

Momen, in return, offered China reassurances about Bangladesh’s neutral stance in the geopolitical competition between Beijing and Washington.

“We maintain a balanced foreign policy. This is our principle,” the Bangladeshi minister told reporters, adding that he assured Qin that Bangladesh will “extend our support to you from time to time.”

Notably, Bangladesh’s relationship with the US has been fraught since December 2021 after the Washington declared sanctions on Dhaka’s security force – Rapid Action Battalion- over alleged human rights violations.

Momen also said, “We believe in one-China principle. We maintain a balanced foreign policy. This is our principle. We will extend our support (to China) time to time.”

Qin made a stopover in Dhaka while he was on his scheduled visit to Ethiopia, Gabon, Angola, Benin, Egypt, the African Union Headquarters and the League of Arab States Headquarters. Notably, for 32 consecutive years, China has made of a point of sending its foreign minister to Africa for the first diplomatic trip of the new year.

On March 8th, the Chinese Foreign Minister, Wang Yi, made history when, on his first diplomatic trip to Africa, he made a midnight stop in Bangladesh. This unusual move is indicative of the importance that China puts on its close relationship with this South Asian country.

Bangladesh has been an ally of China since the mid-1970s, when the two nations entered a strategic relationship and signed a major trade cooperation agreement. Since then, economic and political ties have continued to grow, and the two countries now work together on a multitude of initiatives, including global development, poverty reduction and cross-border trade.

The visit by the Chinese Foreign Minister was seen as an opportunity for China to show its continued and strong support for Bangladesh. By making a midnight stop on his way to Africa, Wang Yi was sending a clear message that China values its partnership with Bangladesh and is willing to take steps to strengthen it.

The visit also came at a time when political tensions have been high in South Asia. China’s show of support to Bangladesh was seen as a diplomatic move to help reduce tensions, while also reinforcing its own commitment to the country.

Overall, the midnight pit-stop by the Chinese Foreign Minister in Bangladesh was symbolic of the strong bond between the two countries and the importance China places on the developing country’s strategic importance. This move not only shows China’s commitment to its ally, but also points to its growing interest in the affairs of this region of the world.