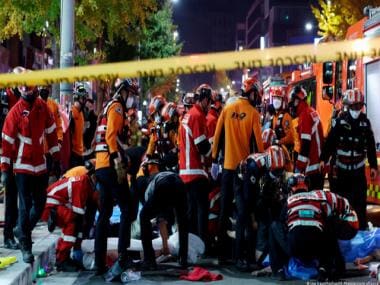 South Korea Stampede: Hundreds of people were crushed to death during a stampede at a Halloween ceremony in Seoul, the capital of South Korea. According to reports, at least 151 people have died so far and more than 150 have been injured.

All the injured have been admitted to the hospital. The bodies have been sent for post-mortem. According to the news agency AFP, local officials said that thousands of people had gathered in the Itaewon area of Seoul to celebrate Halloween. There was a crowd of thousands of people in the narrow streets here.

The crowd became excited and people started climbing over each other. Meanwhile, some people started falling in the rush. There was total confusion for some time.

There was an atmosphere of chaos. People complained of nervousness and restlessness. Dozens of people suffered heart attacks. According to the rescue team, people were given treatment, CPR. Some people have also been rushed to a nearby hospital.

Many global leaders including US President Joe Biden have mourned the incident. Since the accident, officials engaged in relief work have said that most of the people killed are between 20 and 30 years of age.