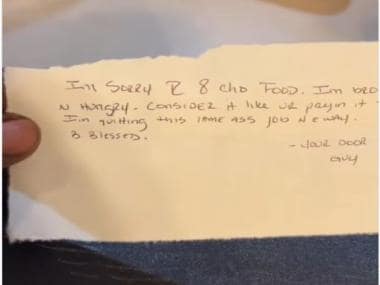 There is no denying the fact that food delivery apps have made our lives easier than we could even imagine. It won’t be wrong to say that to be able to order food at any time of the day and that too according to your liking, is no less than a luxury.

However, time and again the internet has brought forth incidents where either the customers have claimed that they are being duped, or the delivery executives have been caught red-handed while gorging on the meals. Well, adding on to the bandwagon, the internet has put forth a video of a consumer revealing his ordeal of receiving a box full of bones and a sad note instead of the food that he ordered. Yes, you read that right.

Taking to his Instagram account, Damien Sanders revealed that he placed an order for chicken wings. But after receiving his order, when he unboxed it, the parcel literally took him by surprise. The video showed that Damien received an empty plate of fries and a chicken box full of only bones. Damien’s meal was relished by the delivery guy, who left him a sad note, which read, “I’m sorry I ate your food. I’m broke and hungry. Consider it like your payin it forward I’m quitting this lame-ass job in the way. Be blessed. Your Door Dash Guy.” Anguished and aggravated by his parcel, Damien dropped the video with the caption, “The “original” video. Yeah, it’s me! Cmon Now Door Dash Nikka. Not My Chicken!”

As soon as the video was posted, it started buzzing over the internet. Acknowledging the same, while many mocked Damien and made fun of him, several claimed the incident to be fake. Social media users were finding it hard to believe, as they claimed that Damien’s accent and the tone of the note are almost similar. One user commented, “Dude writes the way you talk. Either fake or you can’t blame him for being your alter ego lol.” Another user, starting with a handful of laughing emoticons, wrote, “This is really not funny though.” Many also advised Damien to forgive the delivery executive. So far, the video has garnered around a hundred likes and has been played more than two thousand times.