From Sri Lanka’s exotic beaches which have attracted international tourists to the conservative Gulf kingdom, it will be a major change for him.

Though it may look like an unlikely destination for ousted leaders, Saudi Arabia has, in fact, hosted many of them. Popular guests include former Pakistan prime minister Nawaz Sharif and Ugandan dictator Idi Amin.

Idi Amin was forced to flee after Uganda’s capital Kampala fell to Tanzanian troops in 1979. He first went to Libya but in 1980 shifted to Saudi Arabia, where he stayed until his death in 2003.

To date, Amin is considered one of the world’s most brutal dictators. Nearly 500,000 people were killed under his regime which was marred by ethnic persecution and extrajudicial killings.

In 1972, he ordered the expulsion of Europeans and Asians- mostly Indians from Uganda. 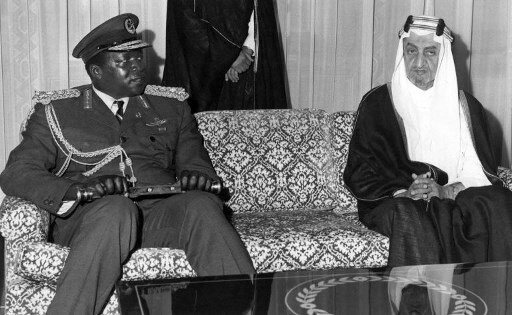 Despite the human rights abuses under his rule, Amin found sanctuary in authoritarian Saudi Arabia where lived in comfort though he was rarely seen in public.

After the 1999 military coup, then-Pakistan PM Nawaz Sharif fled to Saudi Arabia where he stayed at a residence managed by the government of the Gulf kingdom.

As anti-government protests began spreading across Saudi Arabia’s neighbourhood in 2010s as part of the Arab Spring, the oil-rich nation hosted one more leader who fell from grace.

The country’s favours on rulers of neighbouring countries continued. In 2017, it was reported that then-Yemeni president Abdrabbuh Mansur Hadi had been living in Saudi Arabia albeit under house arrest.

The question is why Saudi Arabia offers sanctuary to these ousted leaders? The answer varies in each case.

One thing common among all the leaders mentioned above except for Rajapaksa, is that they were Sunni Muslims.

The Sunni-dominated Gulf kingdom is believed to favour Muslim rulers belonging to that sect of Islam.

Under Amin’s rule, Uganda’s relations with several nations including India, Israel and the UK hit an all-time low. But he had not done anything in particular to harm Saudi interests.

As for Nawaz Sharif, Riyadh and Islamabad enjoyed close relations during his tenure as the PM. A businessman himself, Sharif made several investments in Saudi Arabia.

Daunted by popular uprisings in its backyard, Saudi probably sympathised with Tunisia’s Ben Ali who was ousted by protesters.

In the case of Yemen’s Hadi, it was about tackling arch-rival Iran. Hadi’s government was toppled by Houthi rebels backed by Shia-dominated Iran.

Saudi Arabia which has been ruled by a single family can also easily accept infamous leaders because of a lack of backlash from the public and Opposition. In Maldives, both the public and the Opposition parties protested against the government’s decision to allow entry to Rajapaksa.

Almost a day later, Rajapaksa fled to Singapore which has also been trying to distance itself from the disgraced Sri Lankan leader saying that he has not been granted asylum.

Why Saudi is allowing entry to Rajapaksa

What’s interesting is why, if at all, Saudi Arabia has become a safe haven for Rajapaksa.

He is a Buddhist. Even if he has money to offer, the oil-rich nation doesn’t seem to be much in need of any.

With Nawaz Sharif, Saudi had hopes that he might return to power in Pakistan and he eventually did. But the kind of disgraceful exit Rajapaksa had, it is highly unlikely that he will ever come back to Sri Lanka.

In the final stages of his attempt to flee, airport authorities refused to approve his documents in the VIP queue. He was instead asked to take the normal route where he was at the risk of facing angry passengers. He eventually fled the country on a Sri Lankan Air Force plane.

1 komentar tentang “From Nawaz Sharif to Gotabaya Rajapaksa: Why Saudi Arabia is a safe haven for ousted leaders”