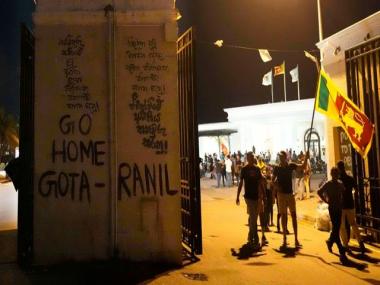 Sri Lanka’s Minister of Labor and Foreign Employment Manusha Nanayakkara and Minister of Tourism and Lands Harin Fernando have decided to resign from their cabinet posts.

Issuing a joint statement, the two ministers, who were members of the Opposition Samagi Jana Balawegaya and left the party as well as recently joined the government, said they are resigning with immediate effect to form an all-party government that everyone is called for.

“We, who were aware of the crisis situation in the country at the moment, asked for government power in the parliamentary elections held after the last presidential election, but the people’s will was for us to work as opposition MPs,” the statement said.

Fernando and Nanayakkara were sworn in as the Minister of Tourism and Land and Minister of Labour and Foreign Employment, respectively, on 29 May.

They had accepted the ministerial portfolios in the incumbent government without the support of Samagi Jana Balawegaya (SJB) and their party membership was later suspended pending disciplinary action.

But the ministers said there was no positive response from the party leaders for an all-party, progressive political journey to solve the country’s problems. All parties did not unite for a collective program.

The citizens of Sri Lanka are infuriated with the economic crisis in the country, the people are demanding a better state of the country.

Sri Lankan Prime Minister Ranil Wickremesinghe was willing to resign to make way for a new unity government, his office said Saturday, after President Gotabaya Rajapaksa fled his official residence when it was mobbed by protesters.

“So as to ensure safety of the citizens, he is agreeable to this recommendation by opposition party leaders” to quit, Wickremesinghe’s office said.

Rajapaksa appointed Wickremesinghe as prime minister in May 2022, in an effort to solve the shortages and start economic recovery.

Wickremesinghe had been part of crucial talks with the International Monetary Fund for a bailout program and with the World Food Program to face a predicted food crisis. The government must submit a plan on debt sustainability to the IMF in August before reaching an agreement.

President Gotabaya Rajapaksa announced his resignation on Saturday, hours after a crowd of angry protesters chased him from his residence, as months of frustration brought on by an unprecedented economic crisis boiled over.

Hundreds of thousands of people massed in the capital Colombo to demand the government take responsibility for mismanaging the nation’s finances, and for crippling food and fuel shortages.