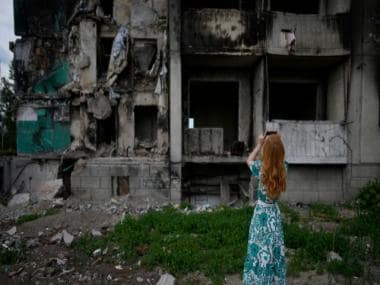 Kharkiv, Ukraine’s second-largest city, is still in ruins due to the ongoing Russia-Ukraine conflict. However, the people there have not lost their resilience. A video from the city shows a group of students performing in front of their bombed-out school to mark their graduation ceremony.

Traditionally students in the country dance the waltz in front of their peers at the end of the school year as the bell rings out for the last time. However, the ongoing war has led to a year like no other for Ukrainian students. Many have seen their schools and homes bombed by Russian troops.

But students of School No 134 in Kharkiv were determined to mark their graduation ceremony despite all hurdles. The video shows the students dancing the waltz at their school’s bombed-out basketball court, while Ukrainian soldiers look on. The families of the students are also seen recording this poignant moment.

As per Metro, about a third of the school’s students had gathered for the ceremony, to dance their last waltz and pose for pictures amid the rubble of their school. The video of the moment has grabbed eyeballs across the web.

Graduates of #Kharkiv School №134 are dancing the waltz near the destroyed building. #StopRussia

Oleksandra Matviichuk, the head of Center of Civil Liberties (Ukraine) also shared a photograph of a young student who was seen commemorating her graduation at the ruined site. “Lost Graduation Day in Kharkiv,” Twitter user Anna Episheva wrote while sharing the image of the girl standing in a red dress in front of the same school.

Anna Episheva: My niece was supposed to graduate this year from her high school. She and her friends bought dresses and were looking forward to this day. Then Russians came. Her school was directly hit and destroyed. Today she came back to what is left of her school and her plans pic.twitter.com/q9cJW2j8f0

Since the start of the war on 24 February, Kharkiv has been a prime target for Russian forces. According to Kostyantyn Nemichev, a soldier who helped to defend the city, School No 134 had been the last outpost of the Russians before they were pushed out of the city.

Recently, Russian forces shelled Kharkiv and order border towns overnight, starting a fresh round of violence in the region.