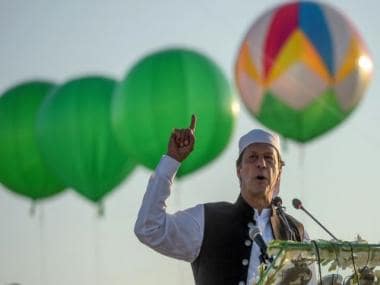 It appears there’s no end in sight to the political chaos in Pakistan.

After losing the no-confidence motion in the National Assembly, Imran Khan, the ousted prime minister, said that although the country gained Independence in 1947, its freedom struggle against “foreign conspiracy of regime change” has begun again.

Pakistan became an independent state in 1947; but the freedom struggle begins again today against a foreign conspiracy of regime change. It is always the people of the country who defend their sovereignty & democracy.

The political turmoil deepened when Imran Khan’s Pakistan Tehreek-e-Insaf (PTI) announced that it was considering to resign en masse from the assemblies.

Also read: Timeline | The dramatic events that led to Imran Khan’s fall from grace and the dissolution of the Pakistan Parliament

On Sunday, senior PTI leader Fawad Chaudhry said that the party’s lawmakers were mulling an en masse resignation from the National Assembly.

The decision came in reaction to Opposition’s choice of prime minister — Shehbaz Sharif.

News agency PTI quoted Chaudhry as saying, “If our objections on Shehbaz Sharif’s (nomination) papers are not addressed then we will resign tomorrow,” he said.

Chaudhry added that it was insulting that Shehbaz would be contesting the election on the same day that he is to be indicted in a money laundering case.

“What can be more insulting for Pakistan that a foreign selected and foreign imported government is imposed on it and a person like Shehbaz is made its head,” he rued.

Chaudhry’s comments are notable, as the special court of the Federal Investigation Agency announced to indict Shehbaz and his son Hamza in the Rs 14 billion money laundering case on 11 April.

However, Shah Mahmood Qureshi, the vice chairman of Imran Khan’s party, clarified that no final decision had been taken on the matter, keeping everyone on tenterhooks.

Appearing on ARY News show Sawal Ye Hai, Qureshi said that no final decision had been taken on the matter of resigning from the National Assembly.

He indicated that they wouldn’t resign, as he was quoted as saying: “In my personal opinion, and from what I’ve gathered during discussions, a clear majority of the party members think that we should protest inside the assembly and also make contact with the public outside.”

The Pakistani National Assembly has a total strength of 342 members, with the majority mark being 172. The PTI-led coalition was formed with the support of 179 members, with Imran Khan’s PTI having 155 members, and four major allies Muttahida Qaumi Movement-Pakistan (MQM-P), Pakistan Muslim League-Quaid (PML-Q), Balochistan Awami Party (BAP) and Grand Democratic Alliance (GDA) having seven, five, five and three members respectively.

This means that if the PTI lawmakers resigned, there would be a vacancy of 155 seats, which would prompt an election — it is unclear yet if a general election would be held.

This would be favourable to Imran Khan. Experts note that in the time to call and conduct an election, there would be some fissures within the Opposition and this would help Imran reclaim moral ground.

The New York Times also reported that an election would test whether the coalition of opposition parties — typically at loggerheads, but teaming up around the goal of the no-confidence vote — can remain united.

Meanwhile, PTI members took out rallies in several cities on Sunday to protest the ouster of Imran Khan.

Chants against the Opposition rang loud in cities such as Islamabad, Karachi, Peshawar, Malakand, Multan Khanewal, Khyber, Jhang and Quetta.

Imran Khan expressed his gratitude to the people of the country for supporting the protests against his ouster as the prime minister of Pakistan.

“Thank you to all Pakistanis for their amazing outpouring of support and emotions to protest against US-backed regime change abetted by local Mir Jafars to bring into power a coterie of pliable crooks all out on bail. Shows Pakistanis at home & abroad have emphatically rejected this,” Imran Khan tweeted.

Never have such crowds come out so spontaneously and in such numbers in our history, rejecting the imported govt led by crooks. pic.twitter.com/YWrvD1u8MM

Protests were also held outside the residence of Pakistan Muslim League (Nawaz) supremo Nawaz Sharif in London, as one group celebrated and the other protested the ouster of PTI chairman Imran Khan from the premiership.

The police was called in to control the situation between the two groups at the Avenfield apartments.