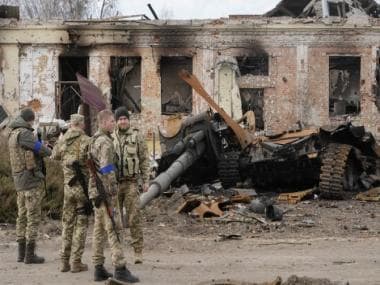 The 40-mile convoy of the Russian army that was heading towards the Ukrainian capital of Kyiv has been destroyed by Aerorozvidka, a team of 30 Ukrainian special forces and drone operators on quad bikes.

According to The Guardian, the Russian convoy of armoured vehicles and supply trucks was halted within days after it started amassing on the outskirts of Kyiv, mostly because of a series of night ambushes carried out by the Ukrainian team.

The Aerorozvidka, as the drone pilots are called, have helped slow down the advancing Russian troops by striking them when they sleep.

Let’s find out more about the elite force Aerorozvidka and how it has been a gamechanger in the ongoing Russian invasion of Ukraine:

The air reconnaissance unit, Aerorozvidka, began eight years ago as a group of volunteer IT specialists and hobbyists who designed their own machines. It has now evolved into an essential element in Ukraine’s resistance against Russia.

However, the Aerorozvidka teams have to launch an attack and run lest the drone’s electronic signature is captured by Russians and attack upon using mortars.

According to The Guardian, the unit was started by young university-educated Ukrainians who had been part of the 2014 Maidan uprising and volunteered to use their technical skills.

Its founder, Volodymyr Kochetkov-Sukach, was an investment banker who was killed in action in 2015 in Donbas.

The unit’s commander, Lt Col Yaroslav Honchar, is an ex-soldier turned IT marketing consultant. He returned to the army after the first Russian invasion in 2014.

Another member, Taras was a management consultant and specialised in fundraising for the unit and joined full-time as a combatant in February.

The team of engineers, software designers and drone enthusiasts developed their own drones after using commercial surveillance drones in the early days of the unit.

Also read: Russia to reduce military activity around Kyiv after ‘meaningful’ talks with Ukraine in Istanbul

How are they resisting Russian aggression

As per The Guardian report, the unit’s ambush near the town of Ivankiv helped stop the Russian offensive.

Honchar that the members of Aerorozvidka were able to approach the advancing Russian column at night by riding on quad bikes through the forest on either side of the road.

“This one little unit in the night destroyed two or three vehicles at the head of this convoy, and after that it was stuck. They stayed there two more nights, and [destroyed] many vehicles,” Honchar said.

When the Russians broke the column into smaller units to head towards Kyiv, the same Aerorozvidka team mounted an attack on its supply.

The team has a range of surveillance drones, as well as 1.5-metre machines capable of dropping bombs and rocket-propelled anti-tank grenades.

They also have a system called Delta at their disposal that is a network of sensors along the frontlines, which shows enemy movements on a digital map.