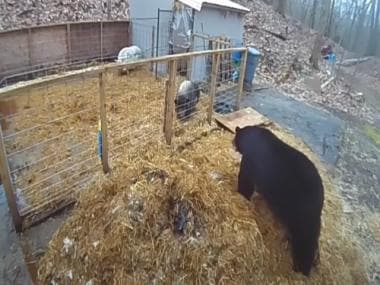 A spine-chilling video of a pair of pigs fighting off a huge wild bear that had climbed into their enclosure has recently gone viral. The dramatic incident was captured at New Milford, Connecticut in the United States on 17 March.

Since being shared on YouTube, the worthwhile clip has been viewed over 7 lakh times. It has left social media users amazed who lauded the defence skills of the pigs.

In the over one-minute-long video, a bear is seen slowly climbing over the fence after being lured by the sight of two pigs. Moments after the bear jumped in, a white pig named Mary immediately attacked it with all its strength, leaving it dazed for a minute.

Meanwhile, another pig named Hammy can be seen growling and charging towards the bear. Finally, the brave pigs corner the big bear inside the pen. Further in their defence, the pigs started growling at the bear and were eventually successful in chasing it out of their pen. Towards the end of the video, the bear can be seen waiting outside the sty, looking at the pigs and then moving away.

“Pigs fight off bear in New Milford,” reads the caption of the clip.

Meanwhile, owner of the pigs Rebecca Shaw said that she is very proud of Mary and Hammy. “Hammy, the little one is afraid of his own shadow and the way he came charging out when he saw Mary tussling with the bear,” Shaw told NBC Connecticut.

Sharing her insight into the matter, Shaw asserted that if there’s a disturbance in the backyard, an alarm goes off but that day she did not hear anything. She got to know about the incident after hearing her son and brother yell.

Since being posted online, social media users can’t stop talking about the pigs’ fighting spirit. Many showered love to the animals while others were left amazed.