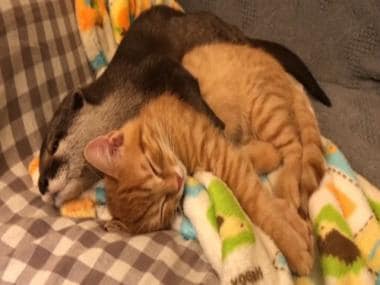 Adorable videos of animals are our favourite thing on the internet. But the ones involving cats have a special place in our hearts. These lazy furry angels are one of the most loved pets of all time.

A year-old video of a kitten, which was originally shared on YouTube, has been doing rounds on Reddit. The video showcases animals’ bonding with each other.

A chunk from the original video shows a kitten is sleeping on a couch. Behind the cat, a little otter is seen holding the feline tightly as it is sleeping. By the end of the video clip, the cute otter also falls asleep while hugging the cat.

Otter can not sleep without hugging kitten from aww

Since being shared, the heartening video has accumulated 10,000 upvotes and a plethora of comments from animal lovers.

“Significant otter!” wrote a Redditor. “One of these things is not like the otter,” commented another. “My heart can’t take the amount of cute,” wrote a third user.

Similarly, a video posted on YouTube last year showed a bond between a cat mother and her baby kitten. The 11-second video shows the cat mom hugging her baby kitten who is perhaps having a nightmare. The video had melted hearts on the internet and social media users showered their love for the adorable video.

In April last year, a video which can also be termed as the cutest depiction of animal bonding, went viral on internet. In the adorable video – posted by WSVN-TV – an elderly female monkey was seen playing with her granddaughter.

In 2018, another such instance of a dog went viral on social media, as reported by BBC News. The dog accepted a lion cub and raised it with its puppies. The lion cub, who was rejected by its mother, was struggling to survive. The zoo staff left the cub with dog puppies and the female dog accepted the cub with an open arm.

What are your thoughts about the cute animal videos above?