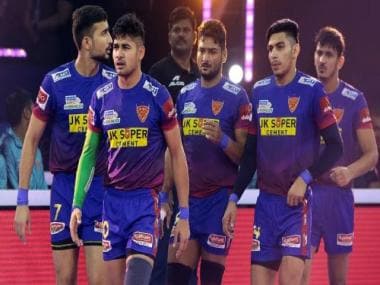 Puneri Paltan 23-20 Dabang Delhi Puneri Paltans are all out! It happens right after the break as Naveen makes the most of Ashu Malik's good work by taking out Paltan's last-man standing in Mohit, who rather meekly surrendered to the raid.

Puneri Paltan 21-14 Dabang Delhi Delhi make up ground with five points on the trot as Ashu Malik's super show from raids sparks the capital's side comeback. Paltan look to avoid an all out at the moment.

Puneri Paltan 21-9 Dabang Delhi Mohit inflicts second all-out on Delhi Dabang by picking three points off his Super Raid. Paltan defense has backed up their raiders well by not allowing opening to the Delhi raiders.

Puneri Paltan 15-8 Dabang Delhi Manjeet picks multiple points through raids to cut down the gap to 11-6 but Akash Shinde led Pune's charge through raiding while Sobmir has been unstoppable in defense to ensure Paltans maintain an upper hand.

Puneri Paltan 7-2 Dabang Delhi Delhi are all out! Mohit takes out the solitary Delhi defender in Manjeet as Puneri Paltans take charge of the game.

Puneri Paltan 0-0 Dabang Delhi The match is also set to begin with both the sides facing each other for the 19th time. Puneris won nine of them and Delhi won eight while a game was tied.

Hello and welcome to Live coverage of Pro Kabbadi matches today. There are two matches lined-up on Tuesday,

Puneri Paltan will be brimming with confidence as they head into the upcoming clash having stayed unbeaten in their last five games with four wins and a tie. They will look to make the most of their momentum and overwhelm a Dabang Delhi K.C. team that’s struggling at the moment. Aslam Inamdar has been their main man in attack with 71 raid points and Mohit Goyat has done well to chip in with 55 raid points. Meanwhile, Fazel Atrachali has galvanised Puneri Paltan’s defence and has scored 18 tackle points in six games. The likes of Sombir with 13 tackle points and Gaurav Khatri with 10 tackle points have also performed well when needed.

After a strong start to the season that saw Dabang Delhi K.C. win their first five games, the defending champions have gone on to struggle and currently find themselves in a four-match losing slump. While they are still placed near the top of the standings, Dabang Delhi K.C. will be eager to snap their losing run soon and will need their star performers to step up on Tuesday. Naveen Kumar with 112 raid points has been the team’s talisman, while Ashu Malik and Manjeet have supported him in attack with 57 and 42 raid points respectively. Defensively, Krishan has been really impressive with 24 tackle points alongside Vishal, who has 22 tackle points to his name.