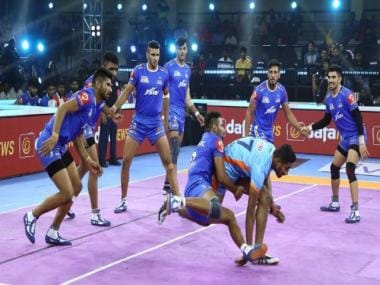 PKL 9 LIVE SCORE
It's an exciting start from the two sides. Thalaivas though are keeping the lead right now but you can't take U Mumba lightly

Pro Kabaddi League Live Scores and Updates:
Hello and Welcome to another exciting day of Pro Kabaddi League Season 9. Tonight is a triple header day with Tamil Thalaivas to kick-off the action against U Mumba.

Here is a line-up of today's games –

After a week of nail-biting and mouth-watering contests at the Pro Kabaddi League, tonight’s three-game action is again expected to delight the fans with amazing tackles and raids.

Tamil Thalaivas will start the day’s proceedings against U Mumba, followed by Haryana Steelers vs Jaipur Pink Panthers, and Gujarat Giants vs Puneri Paltan.

Thalaivas tied their initial match, lost the other, and are yet to open their account with a win this season.  There have been individual performances from the side, but have failed to show collective efforts.

U Mumba, on the contrary, have lost one, but reciprocated it with a seven-point win against U. P. Yoddhas. They will also have the upper hand against Thalaivas having won five of their seven head-to-head contests.

The second match between the Steelers and Panthers is expected to be a neck-to-neck tie. The steelers are unbeaten in the league so far.  Manjeet, Haryana’s lead raider, has accumulated 24 raid points in just two games.

The panthers bagged their first win in the last match against Patna Pirates and will look to continue the momentum on their side. Their lead raider Arjun Deshwal has started the season from where he left the last edition, scoring 25 points in just two games.