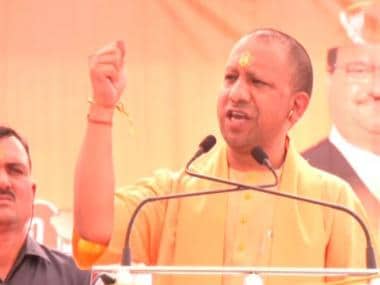 New Delhi: UP Chief Minister Yogi Adityanath, who is campaigning in poll-bound Gujarat, on Saturday hit out at AAP convener and Delhi Chief Minister Arvind Kejriwal saying that he is a true benevolent of terrorism.

“Modi government has eradicated terrorism from the country and AAP’s ‘namoona’ who has come from Delhi is a true benevolent of terrorism,” said Yogi referring to Kejriwal without naming him while addressing a poll rally in Gir Somnath.

#WATCH | Gujarat: Modi govt has eradicated terrorism from the country and AAP’s ‘namoona’ who has come from Delhi is a true benevolent of terrorism. He opposes Ram mandir in Ayodhya, he asks soldiers for proof of a strike in Pakistan: UP CM Yogi Adityanath in Gir Somnath (26.11) pic.twitter.com/pJf3UN6FxO

Yogi further said that he (Kejriwal) opposes Ram mandir in Ayodhya and asks soldiers for proof of a strike in Pakistan.

“Do you ask proof from brave soldiers?” he asked.

Voting will be held in Surat in the first phase of the Gujarat Assembly elections on 1 December.

Modi will address a public meeting at Mota Varachha in Surat after a 25-km road-show from the airport to the rally venue, said the local Bharatiya Janata Party leader Jagdish Patel.

He is also scheduled to address three rallies at Netrang in Bharuch and in Kheda district.

Kejriwal will be on a two-day tour of Surat, which for long has remained a stronghold of the BJP with the support of its textile and diamond industry and lakhs people associated with the sectors.

He will hold townhall meetings with textile industry leaders as well as gem artisans, and address a public meeting at Yogi Chowk. The Delhi chief minister will also hold a roadshow in Katargam, state AAP general secretary Manoj Sorathiya said.

Gujarat will go to polls in two phases on 1 and 5 December, and the results will be out on 8 December.