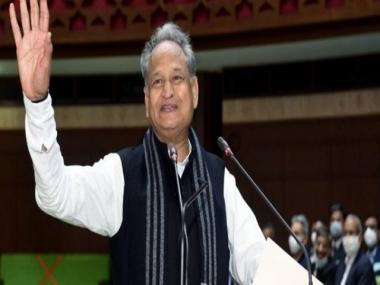 New Delhi: The Congress on Tuesday night issued show cause notices to two Rajasthan ministers Shanti Dhariwal and Mahesh Joshi and MLA Dharmender Rathore for their “grave indiscipline” and asked them to explain within 10 days why action should not be initiated against them.

However, the observers gave a clean chit to chief minister Ashok Gehlot.

The two observers had to return from Jaipur without holding the CLP meeting as a large group of MLAs considered loyal to CM Gehlot refused to join it and put forth certain conditions for the selection of Gehlot’s successor.

PTI citing sources said the report has not sought any action against Gehlot even as it recommended action against three of his loyalists. However, it has pointed out that the parallel meeting of MLAs was held with Gehlot’s knowledge.

The Congress observers’ report pointed to the “gross indiscipline” on the part of some Rajasthan leaders who organised the parallel meet of MLAs and did not allow the CLP meeting to take place.

The report came a day after the observers briefed Sonia Gandhi on the developments and she had asked them to submit a written report.

A fresh crisis hit the Congress government in Rajasthan with the rebellion of 92 MLAs close to chief minister Gehlot amid speculation that the CM will quit.

The crisis erupted as Gehlot announced his candidature for Congress presidential poll. However, according to reports, he has dropped out of the race.

Also read: With Ashok Gehlot ‘out’, who is in the race for Congress president?

In case, Gehlot contests and wins the presidential poll, he will likely have to resign as the CM in case he wins as the party has a ‘one-man one-post’ policy.

Meanwhile, Gehlot’s former deputy Sachin Pilot arrived in New Delhi where he is likely to meet the party high command.

As speculation over Gehlot’s resignation increased, Pilot emerged as the frontrunner to replace the CM.

Gehlot and Pilot were at loggerheads for the chief minister’s post soon after the Congress won the Assembly elections in December 2018. The high command then chose Gehlot as the chief minister for the third time while Pilot was made his deputy.

In July 2020, Pilot along with 18 party MLAs rebelled against Gehlot’s leadership.

How Gehlot became a challenge for Gandhis

The rebellion has been seen as an attempt by Gehlot to become the Congress president while retaining the CM post. The grand old party is already struggling to keep its flock together after a series of high-profile exits including that of Ghulam Nabi Azad, in recent days.

Rajasthan is one of the handful of states where the party is in power.

With 107 MLAs, the Congress has a majority in the 200-member strong Assembly, followed by the BJP with 70. The RLD which supports Congress has one seat while 14 seats are held by Independents.