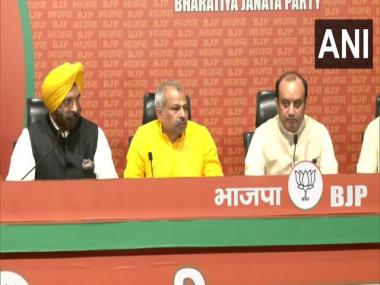 New Delhi: The BJP on Thursday shared a purported sting which nails the AAP’s complicity in alleged liquor scam in Delhi, claiming that the amount of Rs 100 crore in cash was given to the AAP government by the liquor giants, which was later used by Arvind Kejriwal-led party to fund Assembly elections in Goa and Punjab.

BJP aired a sting operation in their press conference which claims to show proof of AAP’s complicity in alleged Delhi liquor scam. The sting aired by BJP claims that total amount of Rs 100 cr was given by liquor giants to AAP in cash, to be used for elections in Goa or Punjab. pic.twitter.com/M9AXj6e2er

The BJP showed the sting at a press conference in which a person linked to liquor trade is claiming that the Chief Minister Arvind Kejriwal-led government deliberately kept smaller players out of its “tailor-made” excise policy, now scrapped, to help a few persons monopolise the market.

“The licence fees which was Rs 10 lakh earlier was raised to Rs 5 crore to weed out the small players in the market. The government was not getting money from retailers, so they stopped fixing a quota for wholesalers to earn big,” said the person in the sting video.

Sting aired by BJP claims AAP’s policy killed small retailers & only let giants live. License earlier for Rs 10 lakhs, was brought up to Rs 5 cr so no small player exists. Govt was not getting money from retailers, only wholesalers, so they stopped fixing a quota for wholesalers pic.twitter.com/iyzYe77RvH

The sting further claimed that while earlier commission for wholesaler/supplier was approxmately 5 per cent, it was now raised to 12 per cent. The same policy was applied in Punjab but at 10 per cent rather than 12 per cent.

The BJP said that Kejriwal has no moral right to continue as the chief minister.

The person featuring in the sting is an accused in the case registered by the CBI to probe the alleged corruption linked to the policy, the BJP said.

BJP spokesperson Sudhanshu Trivedi said the AAP government tried to ensure that only a few persons control the cash flow related to trade. Delhi BJP president Adesh Gupta alleged that it was done for corruption.

This money was used for the polls in Goa and Punjab, Trivedi alleged.

He noted that Kejriwal used to tell people to do a sting on those seeking money illegally from them and he will act against the culprits.

This is the second such sting, the BJP spokesperson said, and no party’s character has been distorted so much power than that of the AAP in last seven to eight years.

“Either Kejriwal should act or he should apologise for his statement,” he said.

“The character of the Aam Aadmi Party shows that politics for it is about “commission”, he alleged.

Those who benefited from the excise policy also framed it, he said, adding that the sting was already in public domain and was not done by the BJP. The BJP has only shared it, he said.

The AAP leader has repeatedly claimed that the excise policy was above board and the BJP has been using probe agencies to target his government for political reasons.