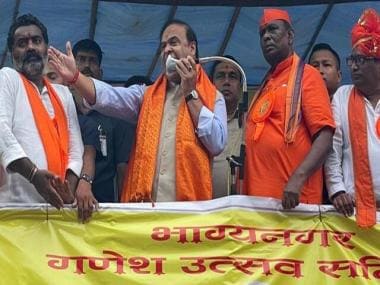 New Delhi: During a rally in Hyderabad on Friday, a man tried to confront Assam chief minister Himanta Biswa Sarma by dismantling the mic installed on the stage. However, the people on the stage quickly overpowered the man.

#WATCH | Telangana: A man tried to confront Assam CM Himanta Biswa Sarma by dismantling the mike on a stage at a rally in Hyderabad pic.twitter.com/HFX0RqVEd8

The man identified as Nand Kishore Vyas was taken into preventive custody by Hyderabad Police.

Later, speaking to mediapersons, Vyas said, “He can have Ganesh darshan and give speech but when he used derogatory language for the chief minister, we could not tolerate it. If someone says something wrong about our chief minister, it will not be tolerated.”

Sarma is on a visit to Hyderabad to participate in various programmes including Ganesh immersion Shobhayatra.

Following the incident, the Deputy Speaker of Assam Assembly Numal Momin demanded a probe into the matter. He also sought Telangana chief minister K Chandrashekar Rao’s apology over the matter.

“Today’s event is a complete failure of the Telangana government. I demand fair inquiry into it. Telangana chief minister should apologise to the people of Assam for this incident,” Momin told ANI.

I strongly condemned the incident and demand Telangana CM @TelanganaCMO to take strong action and provide adequate security to our leaders. pic.twitter.com/lWiMvOACYS

Blaming TRS for the ruckus, Telangana BJP leader NV Subhash said the party was disturbed by the growing popularity of the BJP in the state.

“A TRS activist grabbed the mike so CM Himanta Biswa Sarma will not be able to address the gathering. This shows how the TRS party is becoming intolerant by the growing popularity of the BJP in their state,” NV Subhash told ANI.

Earlier, Sarma had hit out at KCR and said the Telangana Rashtra Samithi (TRS) chief has only been involved in dynasty politics.

“Chief Minister KCR speaks about BJP-free politics but we speak about dynasty-free politics. We still see pictures of his son and daughter in Hyderabad. Country’s politics should be free from dynastic politics,” Sarma told ANI.

“A government should be for the country, but never for a family. The country has a liberal front and an orthodox one and polarisation between the two has always existed,” he added.

Earlier, the Bhagyanagar Ganesh Utsav Samithi on Tuesday staged a bike rally in Tankbund in Secunderabad as a mark of protest against the Telangana government for preventing the immersion of Ganesh idols on the occasion of Ganesh Chaturthi.

With input from ANI