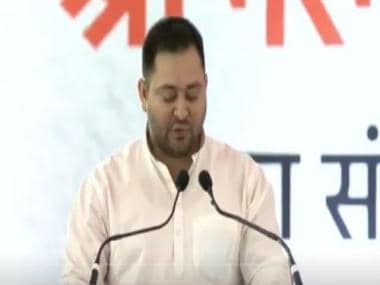 Patna: The Bihar BJP on Wednesday came down heavily on former deputy chief minister Tejashwi Yadav, charging him with having “brought disgrace to Bihar” after he fumbled badly in the course of his address during a function attended by Prime Minister Narendra Modi in Patna.

on Wednesday, state BJP spokesman Arvind Kumar Singh came out with a statement charging the RJD leader with having “brought disgrace to Bihar” and blamed it on Yadav’s “lack of education”, an allusion to his being a high school dropout.

“On the occasion of Guru Purnima, we salute the teachers of Tejashwi Yadav who does not have enough skills to read out from a text … We can imagine how competent he will be if he comes to power,” Singh said sarcastically.

The RJD leader was also viciously trolled on social media where users shared portions of the speech where he struggled.

A sense of unease was visible as Yadav, a fiery orator whenever he speaks extempore, read out from a prepared text though it contained headlines-grabbing points like request for Bharat Ratna for late socialist leader Karpoori Thakur and setting up of a “school of democracy and legislative studies” in Bihar where Vaishali, the seat of the world’s oldest known republic, is located.

It was the first occasion for the 32-year-old leader to share the dais with the prime minister, who was in the city on Tuesday on the occasion of centenary celebrations of Bihar Assembly.

Many media outlets have carried unconfirmed reports of Yadav having been chided for his plumpness by the prime minister, who is almost his father Lalu Prasad’s age, with the curt remark “wazan kam karo” (lose some weight).