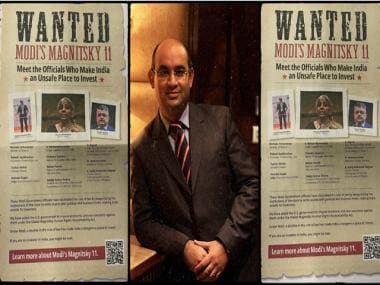 A full-page advertisement on 13 October in the US Wall Street Journal (WSJ) looked like a ‘Wanted Poster’ from The Old West. These old-time ‘Wanted Dead Or Alive’ posters were used to locate gunslingers, stage-coach bandits, railway strong-box dacoits, serial killers, cold-blooded murderers, all quintessential outlaws, often with lucrative bounties on their heads.

To use one such format to accuse 11 Indian government functionaries doing their jobs over a fairly mundane business dispute that they inherited from an earlier dispensation, that too in terms of the perfectly serious Global Magnitsky Act 2016, is patently absurd.

The WSJ, a more-or-less reputable business newspaper, must be financially hard-up to publish such an advertisement. Or, is it out to malign the Government of India along with its dubious advertiser in this silly fashion?

The Global Magnitsky Act of 2016 is a successor of the 2012 Magnitsky Act, originally designed to target important and influential Russians and others in their orbit, such as the former Uzbek president’s eldest daughter, apparently running a criminal cartel, a crooked Ukrainian police chief accused of custodial murder and the like. That the Russians and others have similar blacklists of their own goes without saying.

And in these days of softening and damaged economies all over Western Europe and America because of Covid and the Ukraine War, can hubris like this really stick? Even Saudi Arabia and the United Arab Emirates, let alone Iran and China, do not listen to Western dictation.

Most of those who fall afoul of the Global Magnitsky Act that allows the US and other copycats to sanction individuals, including Chinese who have committed atrocities on the Uigurs, are accused on multiple counts.

These include extortion, influence-peddling, money laundering, corruption, bribery, fraud, involving Western companies and big-wigs or their relatives, operating always in the ballpark of billions of dollars.

The broader global act has, for example, indicted a human body-parts trader from Pakistan, and several military men from Myanmar who allegedly brutalised the Rohingyas.

Several other countries have their own versions of the Magnitsky Act such as Britain and Canada. Australia, and some 30 other small countries are either working on, or have similar legislation.

The person the first law of 2012 was named after, Russian whistle-blower Sergei Magnitsky, died after a savage beating in a Russian prison in 2009, at the age of just 37. He was accused of being involved in the very same massive tax fraud scheme he first discovered. He was absolved of wrong-doing a full 10 years after his death by the European Court of Human Rights.

The law remembering Magnitsky in 2012 was spearheaded by American financier Bill Browder who has been feted and flounced for his efforts to a degree.

In terms of India, it is being cited increasingly by Islamist organisations out to portray India as a human rights violator involving persecution of minorities. Nothing comes of it in a season when America regards India not only as a valued Quad member, but a strategic partner on a bilateral basis, but the ugly noise created is still bad publicity.

And to an extent it is being amplified by Left-leaning media in the US including the New York Times, the Washington Post owned by Jeff Bezos of Amazon, and perhaps now the WSJ too. It is curious why Jeff Bezos is keen on maligning India given the considerable business his company does here.

To some extent it must be assumed that such biased media in America, Britain, Germany, Spain, are seen to be supporting the Opposition in India against a perceived Hindu majority government. One that is showing sufficient strength to win the next five year term in 2024 as well.

It would appear that the Western media, tacitly backed by its governments, prefers a more malleable and corrupt Opposition, instead of the patriotic and financially incorruptible government led by Prime Minister Narendra Modi. As a whole, the Western powers may be interested in curbing Chinese influence and supply chains post Covid, but they are not comfortable with an independent-minded India either. They are not used to an erstwhile third world brown peopled country following its own national interest as it sees fit.

The recent neutrality vis-à-vis Russia in the Ukraine conflict, under considerable Western pressure, is a case in point.

That India will become the third biggest economy in the world by 2028 as per the IMF is worrisome to the West. They would like to slow this down by siding with the opposition that they feel are much more controllable. The Leftist media preferred our emphasis on Socialism rather than growth. Even though it served us badly, with GDP figures never crossing more than 2 per cent for 50 years, they found it more inclusive and India easier to manipulate.

The promotion of an anti-Hindu narrative is therefore part of this put-the-brakes-on-India’s-rise movement.

Sanctioning individuals in India under the Global Magnitsky Act 2016 would be a dream come true not only for those sniping at India from the perch provided by the West, but also the Indian opposition who tend to back the narrative domestically.

However, it probably cannot be done on flimsy grounds, with neither murder, nor mayhem, or financial skulduggery, let alone fondly hoped for genocide, to cite. Human Rights abuses are too numerous and consistent at the US, British, European end of the stick, both domestically and abroad, for it to get anywhere judicially, in a pot calling the kettle black move. After all, the Human Rights Court in Europe did take 10 years to declare Sergei Magnitsky innocent probably when it was safe to say so.

There was an attempt to have the American Biden administration to indict some four Hindu individuals under the Global Magnitsky Act by an outfit called Justice For All, basically a Muslim NGO in America, after the Delhi riots of February 2020, but it has come to nought.

Other efforts by little known NGOs like the Guernica 37 Centre, to indict Indian government officials and politicians are also not gaining any traction in America or in Britain, or in the EU for that matter, except for generating hostile publicity via Islamist, Chinese, Leftist and Activist circles inimical to India.

The only indictments under the Global Magnitsky Act 2016 that actually go through are the ones initiated at the highest echelons of government in the US and elsewhere. President Trump initiated a few. None have been aimed at Indians so far.

And when done, the sanctions have little actual effect except to queer the pitch in business negotiations, visa denial, some imposition of fines, and seizure of assets that may lie in the accuser countries.

This is just as well, given the often hypocritical self-importance that animates many NGOs funded by lobbies with various self-interest at work. And to avoid a chaos of bogus human rights actions that can vitiate the atmosphere in bilateral and multilateral relationships, particularly between allied countries.

In this subject instance however, the advertisement was put in allegedly by one Ramachandran Vishwanathan, a disgruntled would-be supplier of multimedia content via satellite in India.

He released the advertisement under the guise of yet another NGO called Frontiers For Freedom, founded by Republican Party Senator George Landrith.

Vishwanathan, a US citizen, is the former CEO of Devas Multimedia of Bengaluru, a company that was to lease capacity from Antrix Corporation, the marketing arm of India’s department of space. He was to do this on two primary satellites in the S-band. This was in 2005, during the scandal ridden rule of the Manmohan Singh-led UPA government.

The deal may have involved an up-front payment of $20 million as a capacity reservation fee, though the statement is that it was only ‘agreed to be paid’.

It was ostensibly for a 12-year lease, with an option for a further 12 years thereafter, plus a payment of $9 million to $11.25 million per annum for each year of the lease actually operated on the satellite. The entire deal smacks of payola and kickbacks of course, and probably involves the seamier side of Antrix and Devas officials as well. Subsequent court and investigative actions have turned up money-laundering and other offences.

However, in 2011, the Cabinet Committee on Security, still under the UPA, probably panicked by the bad news leaked, banned any commercial exploitation of the S Band, and cancelled the orbital slot for Antrix.

This is standard procedure adopted by the UPA time and again to achieve plausible deniability.

The two companies, Devas and Antrix, have been locked in a legal battle ever since. The Indian courts have found in favour of Antrix, and the US courts in favour of Devas, including the permitting of seizure of some Antrix assets and allegedly, even Government of India assets under the Airports Authority of India in America.

The sting that Vishwanathan is reacting to after all this time is based on Delhi High Court setting aside, in August 2022, a $1.3 billion arbitration verdict in favour of Devas Multimedia that had been passed in 2015 by the International Chamber of Commerce. In addition, the Indian government has sought Vishwanathan’s arrest on charges of corruption. It has also frozen Devas accounts in Mauritius through the use of the Mutual Legal Assistance Treaty (MLAT) and requested an Interpol red corner notice for his extradition from the US.

In turn Devas Multimedia seized $87,457.47 in cash from Antrix Corporation’s account in the US, and a property in Paris after getting favourable orders from US, French and Canadian Courts on the basis of the ICC award.

If it was not potentially libellous, the advertisement could be considered farcical. It was designed to embarrass the finance minister during her visit to Washington to meet with the World Bank, the IMF and others. Will the Government of India react officially? Probably not, at least they haven’t done so yet.

Ministry of Information and Broadcasting Adviser Kanchan Gupta however tweeted condemning the ‘fraudsters’. Several other patriots have also chimed in.

The author is a political and economic commentator based in Delhi. Views expressed are personal.