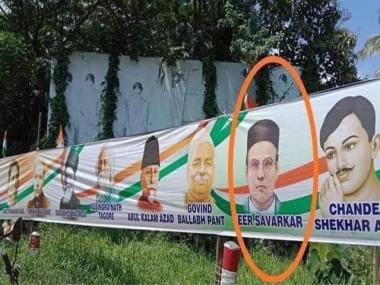 New Delhi: Hindutva propounder Veer Savarkar once again muddied political waters Wednesday when the Left government in Kerala showcased him along with other freedom fighters all along the route for Rahul Gandhi’s ‘Bharat Jodo Yatra’.

BJP lashes out at Rahul Gandhi

Lashing out at Wayanad MP and Congress leader Rahul Gandhi, BJP national spokesperson Shehzad Poonawalla said, “Rahul ji, no matter how much you try… history and truth comes out.”

“Savarkar was Veer! Those who hide are the ‘kaayars’”.

“Oops! It seems all attempts by Rahul to obfuscate history did not work!” tweeted Poonawalla, adding, “Veer Savarkar against whom Rahul has been spewing lies was exposed when his #BharatJodo Yatra in Aluva, Ernakulam carried posters of Veer Savarkar!  Later on they tried to cover it up! Savarkar Zindabad.”

Rahul ji, no matter how much you try… history and truth comes out

Savarkar was Veer ! Those who hide are the “kaayars”

Poonawalla said truth and history can’t be hidden. “No matter how much lies and venom Rahul Gandhi spews, and he even discard the views of Indira Gandhi on Savarakar.”

Poonawalla called Savarkar ‘greatest of the great’ and therefore, pictures of Veer Savarkar had been placed in Congress’ Bharat Jodo Yatra.

“The truth is that Veer Savarkar, Mahatma Gandhi and all these great leaders have fought for India’s independence, but Congress only paid obeisance to one family – The Nehrus and Vadra dynasty and avoided contributions by others,” the BJP leader said.

Savarkar’s poster along with other freedom fighters was spotted by Kerala’s independent MLA PV Anwar, supported by the LDF.

The row over Savarkar’s pictures and poster is nothing new in southern India. August this year saw intense protests in Karnataka and senior Congress leader from the state BK Hariprasad put himself in controversy by calling the founder of Pakistan Muhammad Ali Jinnah and Veer Savarkar were “same”.

“It is because of Jinnah and Savarkar the country is facing the current situation,” Hariprasad said.

“Veer Savarkar was an atheist. He does not believe in any gods. Similarly, Jinnah was also atheist. Two atheists came together to bring the nation to the present state,” he had said.