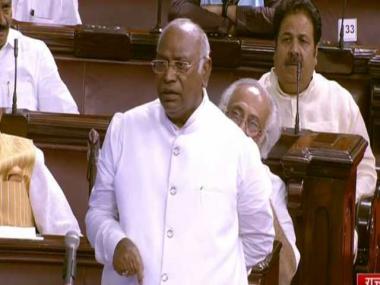 New Delhi: Leader of Opposition in Rajya Sabha Mallikarjun Kharge on Thursday told the House that he received an “urgent” summon from the Enforcement Directorate, investigation a money laundering case related to the National Herald newspaper.

He said the summons issued to him by ED was inappropriate considering that the Parliament session is underway.

“I received Enforcement Directorate (ED) summon. They called me at 12:30 pm (on Thursday). I want to abide by law, but is it right for them to summon when Parliament is in session?” Kharge asked the Parliament.

He further asked, “Is it right for Police to gherao residences of Sonia Gandhi and Rahul Gandhi? ..We won’t be scared, we’ll fight.”

Kharge also accused the government of ‘demoralising’ the Opposition with the use of central agencies.

Responding to Kharge accusations, Union Minister and Leader of the House Piyush Goyal said that the Centre does not interfere in the workings of law agencies.

“Maybe during their (Congress) rule, they might’ve interfered, but not us. The accusation by the Opposition is baseless. If they have done a mistake, the law enforcement agencies will do their duty and find out,” Goyal said.

The ED resumed its raids at the office of Young Indian (YI), the holding company of Congress owned newspaper National Herald, on Thursday.

Kharge presented himself before agency officials at the Herald House building at Bahadur Shah Zafar Marg near ITO around 12:40 pm. The 80-year-old Congress leader met probe agency officials on the summons which sought his attendance during the raids at Young Indian in his capacity of being the principal officer of the company.

Congress interim president Sonia Gandhi and party leader Rahul Gandhi are among the promoters and majority shareholders in Young Indian. Like her son, the Sonia too has 38 per cent shareholding.

On Wednesday, ED sealed the single-room office of the Young Indians to “preserve evidence” as it could not search it during the last two days because it was locked and authorised representatives were not available.

The National Herald newspaper is published by Associated Journals Ltd. (AJL) and its holding company is Young Indian. The newspaper office is registered in the name of AJL.