Reports that a Chinese village has come up nine kilometres to the east of Doklam on the Bhutanese side has once again shone the spotlight on the hotly-disputed area surrounded by India, China and Bhutan.

NDTV accessed satellite images showing a fully inhabited Chinese village with cars parked at the doorstep of virtually every home at the site where Indian and Chinese forces engaged in a 73-day standoff off in 2017 after Beijing tried to extend a road in an area Bhutan claimed belonged to it.

The village, which Beijing has named Pangda, lies in Bhutanese territory, as per the report.

But what is Doklam? And why does China keep interfering in the area?

Spread over less than 100 square kilometres, Doklam is an area on a Bhutanese plateau which falls between China and India.

It comprises a plateau and a valley at the trijunction between India, Bhutan and China and is surrounded by the Chumbi Valley of Tibet, Bhutan’s Ha Valley and Sikkim.

What makes Doklam so important?

The corridor, also known as the Chicken’s Neck, is a vulnerable point for India, which shares an unsettled 3,500-km border with China.

The Doklam tri-junction is considered vital to India’s security interests.

The India-China stand-off in the Doklam plateau in 2017 even triggered fears of a war between the two nuclear-armed neighbours. Bhutan said the area belonged to it and India supported the Bhutanese claim.

India had strongly opposed the construction of the road at the Doklam tri-junction as it would have impacted its overall security interests.

The India-China face-off was resolved following several rounds of talks.

This comes in the backdrop of troops from both countries remaining deployed near each other in a separate border dispute in the Ladakh region, about 1,100 kilometres from Doklam, where they clashed in hand-to-hand combat in 2020.

Why are these developments important to India?

NDTV on Tuesday came out with the images captured by MAXAR, a company that focuses on space technology and intelligence.

It said alongside the village is a neatly marked all-weather carriageway that goes 10 kilometres into Bhutan’s territory along the banks of the Amo Chu river – which is part of China’s “extensive land grab” in Bhutan.

For India, construction along the Amo Chu means that Chinese forces could end up getting access to a strategic ridge in the adjacent Doklam plateau, NDTV reported.

This would give them a direct line-of-sight to the Siliguri Corridor. The satellite images also reportedly show that another village in the Amo Chu river valley is nearly complete and that Beijing has increased the pace of construction on a third habitation further south in the valley.

Bhutan, a country of less than 800,000 people, has been negotiating with Beijing for almost four decades to settle their 477-kilometre border.

At issue for Bhutan is not just territorial integrity, but also concerns over the potential security implications for India, which is the Himalayan kingdom’s main ally and economic partner. 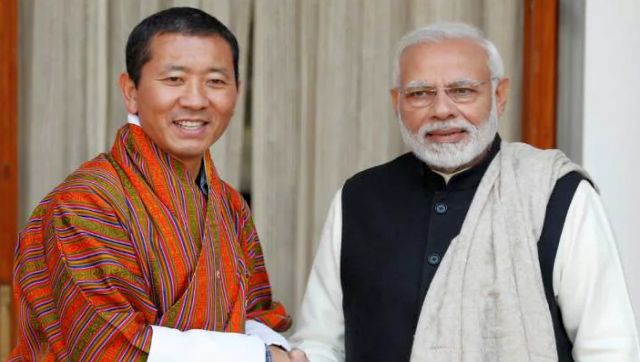 The Print reported that India is leaning on Bhutan to settle its border issue with China to enable New Delhi to define the trijunction area of Doklam.

It is feared that Beijing is pulling a South China Sea in Bhutan — gradually taking over land. Sources also told The Print New Delhi is concerned Beijing is raking up the border issue with Thimpu to harass New Delhi due to the ongoing border dispute at the Ladakh sector along the Line of Actual Control (LAC).

Sources told The Print Bhutan will now have to take a “strong stance” against China before it becomes too late for them to start negotiations on the border issue. This will enable India to push China to discuss the trijunction area around Doklam.

“They have their own talks with China on boundary and are keen to reach settlement. This will also help us define the trijunction,” a top official told The Print on condition of anonymity.

The Bhutanese foreign ministry said Bhutan and China had agreed during the latest round of boundary negotiations in April 2021 to speed up the process of resolving their differences. It declined to discuss the details of the plan to do so.

“All issues are discussed between Bhutan and China within the framework of the Boundary Talks,” the ministry had said.

‘Keeping an eye on all developments’

Meanwhile, India on Thursday said it keeps an eye on all developments having bearing on national security.

“We keep an eye on all developments having bearing on national security and take measures accordingly,” he said.

Bagchi was replying to a question on new satellite images that showed construction of a Chinese village east of the Doklam plateau on the Bhutanese side.

The Indian and Chinese armies were locked in a 73-day stand-off at the Doklam tri-junction after China tried to extend a road in the area that Bhutan claimed belonged to it.