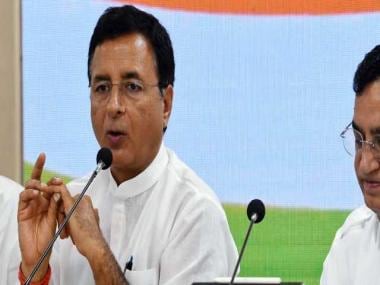 Ahead of Rahul Gandhi’s appearance before the Enforcement Directorate (ED), Congress’ general secretary Randeep Surjewala on Monday said that the party started Young Indian and the majority of the money went into paying salaries to journalists and staff.

Surjewala said that there is no money-laundering in the National Herald matter and the loan given to the newspaper was for payment of salaries of journalists and to address other expenses.

“It became difficult to run National Herald and Journals Limited. Journalists could not be paid. The merger was done to pay journalists their salaries,” the Congress general secretary said.

Rahul Gandhi has been summoned by ED in connection with a money laundering case related to the National Herald newspaper.

Addressing a press conference at the Congress’ headquarters in Delhi on Monday, Surjewala said that the Modi government has imposed an “undeclared emergency” in Delhi and alleged that thousands of its workers and leaders have been arrested or placed under house arrest.

He further claimed that “the Modi government was scared of Rahul Gandhi or the Congress” as they only planned to march towards the ED’s office when their leader appears before the agency for questioning.

Surjewala said the Congress is fighting for the truth, which cannot be suppressed and they will continue with this fight against “injustice”.

“The Modi government has imposed an undeclared emergency in Delhi and thousands of barricades have come up and thousands of our Congress workers have been arrested since last night,” Surjewala said.

“We will answer every question that the ‘Election Department’, the ‘puppet ED’ will ask. For, the truth will win in the court of untruth and tyranny,” he added.

Asking why thousands of policemen have been deployed in central Delhi ahead of Rahul Gandhi’s visit to the ED office, Surjewala said: “Is there any threat to the Modi government? Why are you so scared?”

He further said that the Congress will continue its ‘Satyagrah’ fearlessly against the “undeterred draconian subjugation of civil rights and democracy by the Modi government.”

“We will fight undeterred, we will fight fearlessly and we will fight for the people of the country, the downtrodden and the middle class against all-round inflation and joblessness,” Surjewala said.

The Enforcement Directorate has also summoned Congress president Sonia Gandhi in the case on 23 June.