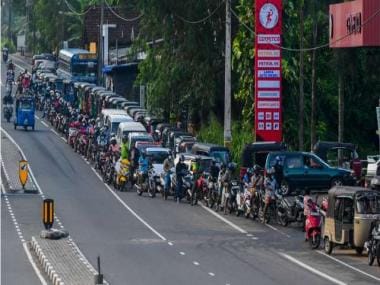 Crisis continue to get worse in Sri Lanka with every passing day. The newly-elected Prime Minister Ranil Wickremesinghe said that the island nation has run out of petrol and just have a stock that would barely last for a day. Meanwhile, the country’s power minister has asked citizens not to join the serpentine fuel queues that have led to weeks of anti-government protests.

“At the moment, we only have petrol stocks for a single day. The next couple of months will be the most difficult ones of our lives,” PM Wickremesinghe said.

To get a slight respite in the ongoing fuel prices, Wickremesinghe said two more diesel shipments under the Indian credit line are due on 18 May and 29 May. “We are working to obtain dollars in the open market to pay these shipments,” the Sri Lankan PM said.

He further asked the people of his country to be prepare themselves to “make some sacrifices and face the challenges of this period”.

The Sri Lankan prime minister also said that in order to ease the queues at petrol stations, the country needs approximately USD 75 million.

For the unversed, a quarter of electricity in Sri Lanka is generated through fuel and with shortage the coming days would be more difficult for the people of the country. There is a possibility now that the daily power outages in the nation will increase to 15 hours a day.

Apart from fuel and other essential commodities, Sri Lanka is also suffering from acute shortage of medicine, raising fears of health of people of the country amid the COVID-19 pandemic.

PM Wickremesinghe said that his government do not even have adequate to pay 1.4 million civil servants their salary in May.

Falling deep in its economic crisis, Sri Lanka has been increasing its dependency on its neighbour India for essentials including food items, fuel and medicine.

Sri Lanka has already been extended credit lines and currency swaps worth over $3 billion by India. Also, New Delhi continues to defer seeking repayment of at least $2 billion in dues owed through the Asian Clearing Union.

Despite an export ban of urea fertilizer from India, the Indian government, at the request of the Sri Lankan government, has recently supplied 65,000 metric tons of urea to the crisis-hit island country under the existing USD 1 billion Indian line of credit.

India has also promised to provide over USD 3 billion to Sri Lanka in loans, credit swaps, and also credit lines since the beginning of the year. India has also expressed its desire to work with the new Sri Lankan government.

Sri Lanka needs a minimum $3 to $4 billion this year to put itself at bay of the economic crisis.

In the last three months, India has extended assistance of nearly $2.5 billion to Sri Lanka, including credit facilities for fuel and food.

Also Read: Fifteen-hour-long power outages to starvation: What awaits Sri Lanka as it runs out of petrol?

From mid-March this year, over 270,000 metric tonnes of diesel and petrol have been delivered to Sri Lanka.

Around 40,000 tonnes of rice have been supplied by India to Sri Lanka under the recently extended $1 billion credit facility. Ahead of the Sinhala and Tamil new year, India sent a shipment of 11,000 MT of rice to help people of Sri Lanka celebrate their biggest festival.

In February, $500 billion India gave to Sri Lanka as a short-term loan to help it purchase petroleum products through the ministry of energy and the Ceylon Petroleum Corporation on behalf of the government of Sri Lanka.

In November 2021, India provided 100 tonnes of nano nitrogen liquid fertilizers to Sri Lanka as their government stopped the import of chemical fertilizers.

Also, the Reserve Bank of India (RBI) has extended a currency swap of $400 million and deferred payments owed by the Central Bank of Sri Lanka under the Asian Clearance Union worth several hundred million dollars.

On 10 April, India sent vegetables and daily ration items to Sri Lanka for the people of country battling on a regular basis to purchase essential items amid soaring inflation rates. Ships filled with sugar, rice and wheat were also sent by New Delhi to Colombo.