The elections in Bharat bring along with itself new lessons. Public behaviour and reactions to political campaigns often act as an indicator of the public pulse. Elections not only change governments, but also set discourses and have deep impressions on the coming generations.

Political parties have in the past used elections to seep in their agenda and have even gone to the extent of dividing people based on their different identities. Such divisive exploitation had earlier weakened the spirit of the people and left an indelible scar in the minds of the people. One prime example of this is the rise and fall of the Khalistani movement for political gains in Punjab and the genocide of Sikhs following the death of Indira Gandhi. The episode left a fragmented society. The trauma of the episode is felt even today. Thus the recent Assembly election results are very significant in deciding the fate of not only a state but the entire nation.

The results declared on 10 March of the recently concluded elections in five states are of great relevance. That day, the nation witnessed two major phenomena, one is the consolidation of Bharatiya Janata Party (BJP) in the states which it ruled; and the second is the Aam Aadmi Party (AAP) emerging as an alternative in the Congress-ruled states. Both these phenomena have national importance and are likely to shape the politics of the nation in the coming decade. However, the rise of the AAP deserves much greater scrutiny, especially due to the threat it poses to national security with Punjab being a border state and having a history of insurgency. To understand this, it is important to trace the history of both the AAP as well as its founder.

The foundation of the AAP lies in the India Against Corruption (IAC) movement against the rampant corruption prevalent in the Congress-led UPA II government between 2009 and 2014. Though the event was spearheaded by Gandhian Anna Hazare, some members of IAC, including Arvind Kejriwal decided to form a party to fight corruption in politics. The aim was more in words than in action which was also highlighted by the sequence of events that followed later. 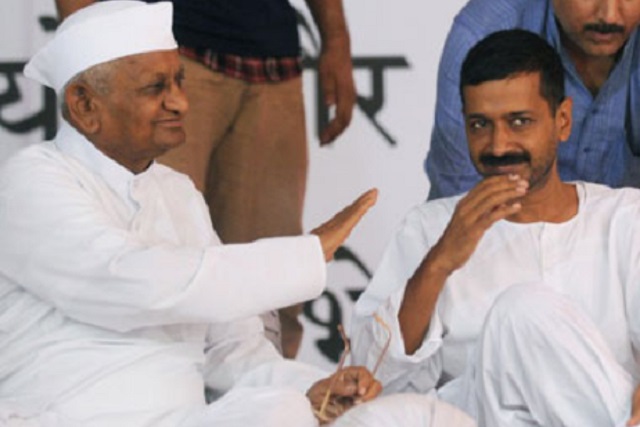 The IAC movement was a major success and was the bedrock for the formation of the AAP on 26 November 2012. The party targeted the Delhi elections of 2013 as its first major election. It went all out against the then ruling Congress in Delhi labelling multiple corruption charges against the then CM of Delhi, Sheila Dikshit. However, the AAP under Kejriwal after the 2013 election results decided to form the government in a coalition with the same Congress. The AAP didn’t initiate any proceedings against Sheila Dikshit in its short-lived 49-day government before Kejriwal resigned to fulfill his national ambition in the Lok Sabha elections in 2014. 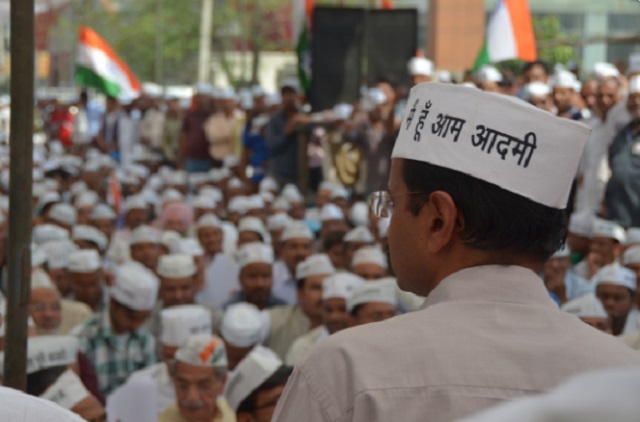 The mercurial nature of the founder as well the party was visible from the start. In the 2014 Lok Sabha elections, the party faced a major drubbing and it even failed to win even a single seat in Delhi. However, the 2014 drubbing brought in a lot of course corrections by the AAP and Kejriwal. He shifted back the focus entirely to Delhi. In the 2015 Vidhan Sabha elections, the AAP came back with a resounding victory and the entire Congress vote-bank almost shifted to the new party.

From 2015 onwards, the AAP has shifted goalposts. Corruption has no longer been the main agenda. No action was taken against Sheila Dikshit; instead, the onus was put on Prime Minister Narendra Modi and Lt governor Najeeb Jung for putting her behind bars. Even the Jan Lokpal Bill, which formed the bedrock of Kejriwal’s poll pitch, took a back seat. The 2020 Delhi elections witnessed Kejriwal coming back to power in the backdrop of massive polarisation caused due to the Citizenship (Amendment) Act, 2019 and the Congress being decimated with voters choosing AAP over INC.

Outside of Delhi, the AAP majorly expanded in small states like Goa, Uttarakhand, Chhattisgarh, Jharkhand and also in states like Punjab and Gujarat. The major push for Punjab was seen even before the 2017 Vidhan Sabha elections. The situation in Punjab before the 2017 election signalled a change in regime in the state. This was majorly due to high anti-incumbency against the Shiromani Akali Dal (SAD) and BJP alliance. Both Congress and AAP were looking to capitalise on the situation.

However, before the elections, the true colours of Kejriwal and AAP came out in the open. Multiple allegations of collusion of the AAP with Khalistani elements were made. There was a huge uproar when Kejriwal himself stayed in the house of a Khalistani separatist. Even AAP member Gul Panag mentioned warning AAP against flirting with Khalistani elements. However, the trend of AAP support for the Khalistan agenda didn’t stop even after the 2017 Assembly election. In 2018, AAP MLA and leader of opposition Sukhpal Singh Khaira supported the Khalistan referendum call and said its organisers were within their rights to carry out the referendum. Again, before the 2021 Punjab elections, several allegations were labelled against the AAP for seeking the support of Khalistani elements in the society.

The numerous allegations against the AAP on getting the support of Khalistani elements further got consolidated when a banned Khalistani group, ‘Sikh for Justice’, said that the party won the 2022 elections in Punjab based on Khalistani voters’ support as well as financial support and it’s time for it to fulfill the agenda of Khalistan referendum. These are dangerous trends. A banned outfit openly flaunting support to a party is a major security concern. This is especially so in a state like Punjab where the insurgency has been a major issue. The AAP winning in Punjab is a major security issue that needs to be dealt with carefully.

The shoddy connection of the AAP and its founders with anti-national elements is not a new phenomenon. Even before Kejriwal started the AAP, he accepted that his NGO Kabir received funds from Ford Foundation, an NGO working at the discretion of the US’ CIA. He later, however, made several flip flops on the statement but several accusations were made against him on the same lines.

It is an open secret that the CIA had used NGOs such as the Ford Foundation to destabilise democracies and have also funded political parties to influence a nation’s polity and gather intelligence. The Ford Foundation has also been accused of illegally funding political parties and profit making bodies in Bharat. Moreover, the role of AAP councillor Tahir Hussain in the Delhi riots is very well known. The AAP sat over an entire riot protecting the perpetrators like Tahir Hussain just for minority voters.

Such associations are not small issues but a major concern, especially if a political party has such shoddy associations. This is even more so if the party is said to be championing the cause of education for the next generations. Another thing apart from the association with anti-national elements that is worrisome is the policy that the AAP is propagating. Currently, Kejriwal is going across the nation spreading the Delhi Model. The same Delhi Model is based on freebies, liquor and anarchy.

Many experts have stated that that freebie model of governance will set a dangerous precedent for democracy as it leads to greater public debt and allows political parties to bribe voters through freebies. Also, the Delhi government under the AAP has taken up a liquor policy to promote liquor consumption in the state. The government is expected to gain more revenue from more private liquor stores. This is again a classic example of desperation on the part of a government to gain revenue from something that is considered immoral in the society just to support its freebie policy. This is even more dangerous if we consider that Delhi ranks highest in fatal road accidents due to drunken driving. This reflects on the sheer apathy on the part of the government for the people.

The AAP is slowly trying to gain national relevance. It is important to carefully observe its next step. Its victory in Punjab can be owed to the political vacuum created in Punjab after the Congress and SAD had lost public support. The strategy of the AAP after losing out in the Lok Sabha 2014 and 2019 is to make itself politically relevant in the national scheme of things. It appears to be one of the long-standing ambitions of Kejriwal. Along with Delhi, they have focused on small states like Goa, Uttarakhand, Chhattisgarh and Jharkhand where along with party symbol voting, the individual influence of candidates also becomes important. Apart from Punjab, the AAP’s performance in states like Uttarakhand and Goa was rather poor in the current elections. Also, they have traditionally not done well in big states where more gumption is required in terms of cadre strength and social media rhetoric doesn’t work. The best example of this is the result of the AAP in Uttar Pradesh. However, the most fertile ground for the AAP ever since its inception has been the Congress-ruled states where transfer of power between INC and AAP is rather smooth and there is a major consolidation of INC voters towards AAP. This was the case in Delhi in 2015 as well as in Punjab in 2022.

The AAP which came with a promise of alternate politics is reduced to a subsidiary version of the Congress with no major ideological difference. This also aids the vote transfer. Rather than siding with the BJP, Congress and Left inclined voters choose the AAP which serves to provide a new label to these two old parties’ ideologies. This is also substantiated in the AAP ticket distribution in the 2020 Delhi Assembly elections where the party dropped its several MLAs and fielded many Congress entrants. Currently, the AAP has set its eyes on the Gujarat elections and is aiming to replace Congress as the principal Opposition.

The aim of the AAP appears to be to cash in on the depleting popularity of the Congress across the nation, with a special focus on small states. The AAP has till now not been able to make inroads in BJP-ruled states and has faced a major drubbing in all states. This is largely due to the lack of response of the party to the Hindutva plus development agenda of the BJP in its ruling states. The AAP doesn’t seem to care about forming the government in a BJP-ruled state, but is focused on being the principal Opposition to have some relevance. In the coming time, the party is seeking relevance at the national level.