COVID-19 is far from over but another disease is already creating a scare. Monkeypox, a rare viral disease associated with the tropical rainforests of Central and West Africa, is spreading in Europe and the United States.

At least 75 monkeypox cases – 33 confirmed and 42 suspected – have been reported across countries outside Africa.

Countries outside Africa where confirmed: 7

The first case in the United Kingdom was reported 7 May, in someone with a travel history to Nigeria. The UK Health Security Agency had said monkeypox is a rare viral infection that does not spread easily between people and is usually a mild “self-limiting illness”.

However, cases are on the rise.

Where have monkeypox cases been detected so far?

In the latest outbreak, monkeypox cases have been detected in the US, Canada, UK, France, Sweden, Spain, Portugal, Italy, Belgium, Germany and Australia.

France, Belgium and Germany declared their first cases on Friday.

There are now 20 confirmed cases in the UK, Health Secretary Sajid Javid said on Friday.

In the US, one case has been confirmed but the Centers for Disease Control and Prevention, the country’s national public health agency, is monitoring six people for possible infection after they sat next to an infected traveller who had symptoms while on a flight from Nigeria to the United Kingdom in early May, reports CNN.

Separately, CDC officials are investigating the case of monkeypox confirmed in a man in Massachusetts who had recently travelled to Canada. And the New York City Health Department is investigating a possible infection in a patient currently at a hospital.

In Canada, there are at least a dozen suspected monkeypox cases, AFP reported. Two of them were confirmed on 19 May.

Australia’s first case was detected in a man who fell ill after travelling to the UK, the Victorian Department of Health said, reports BBC.

How is the virus transmitted?

Monkeypox is a virus transmitted to humans from animals, with symptoms very similar to smallpox but less severe clinically.

In Africa, monkeypox has been found in many animals including rope squirrels, tree squirrels, Gambian poached rats, dormice as well as different species of monkeys and others.

The World Health Organization (WHO), however, says human-to-human transmission is limited.

Person-to-person transmission isn’t common, as it requires close contact with bodily fluids, such as saliva from coughing or pus from the lesions. So the risk to the general population is low, according to the UK health agency notes.

However, in England, seven of the eight cases don’t involve recent travel to Africa, suggesting the patients involved in those cases caught the virus in England. On top of that, those individuals haven’t had contact with the one patient known to have travelled to Nigeria in early May.

Together, this data suggests the virus is spreading in the community undetected, reports NPR. 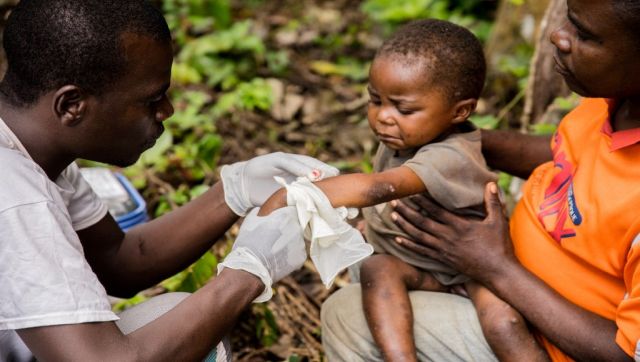 Have there been outbreaks in the past?

There has been an outbreak in the US in 2003. Forty-seven confirmed and probable cases of monkeypox were reported from six states – Illinois, Indiana, Kansas, Missouri, Ohio, and Wisconsin.

All people infected with monkeypox in this outbreak became ill after having contact with pet prairie dogs. The pets were infected after being housed near imported small mammals from Ghana. This was the first time that human monkeypox was reported outside of Africa, according to the US CDC.

In 2020, over 6200 suspected cases were reported in the Democratic Republic of the Congo. An outbreak occurred in Nigeria from 2017 to 2019, with cases still being reported in 2021. In addition to Nigeria, outbreaks have also been reported in nine other countries in central and western Africa since 1970, says WHO.

Can monkeypox lead to a pandemic?

However, a pandemic is unlikely. “I don’t think the science points to that at this moment,” Canadian epidemiologist John Brownstein told News Scientist. “It’s important not to put this on the same level as a novel coronavirus.”

However, it’s unusual that cases are not been traced to a similar source or contacts.

Is there a vaccine for monkeypox?

There is no proven safe treatment for the infection. To control outbreaks, the smallpox vaccine, antivirals, and vaccinia immune globulin (VIG) can be used.

A smallpox jab offers 85 per cent protection since the two viruses are quite similar, reports BBC.