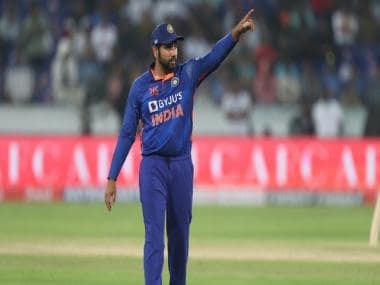 India skipper Rohit Sharma on Wednesday admitted that the hosts slipped up in the latter part of the Kiwi run-chase, despite emerging victorious in the first ODI in Hyderabad by 12 runs.

New Zealand’s hopes of chasing down a target of 350 in the ODI series opener took a hit at the halfway stage, being five down for 110 in the 25th over after Glenn Phillips departed, but a gritty 162 run stand between centurion Michael Bracewell (140) and Mitchell Santner (57) revived the visitors, and setup a platform to initiate a comeback. While Santner was dismissed in the 46th over, Bracewell would stay form till the final over of the match, before being dismissed by Shardul Thakur.

“To be honest, the way he (Bracewell) was batting and the way it came on to the bat nicely, it was clean ball-striking. We knew that if we bowled well, we would be okay unless we really slipped up with the ball. Unfortunately, that’s what happened. I did say at the toss that I’d like to see us challenge ourselves, not quite the situation I expected but that’s how it is,” Rohit said at the post-match presentation.

“He (Gill) is going really well. The form he was in, we wanted to make use of it and that’s why we backed him in the SL series. Free-flowing batter and it’s quite exciting to watch,” added Rohit.

Mohammed Siraj stood out for India among the bowlers, finishing with figures of 4/46 from 10 overs.

“Siraj has been brilliant, not just in this game but in the red-ball, T20 format and now ODIs. Really good to see what he does with the ball. Executing what he wants to do and he is very clear about his plans. Which is how it should be,” continued Rohit.

India will now look to seal the three-match ODI series, when the two teams meet in Raipur for the second ODI on Saturday.