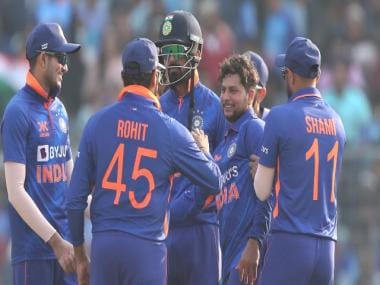 Rohit Sharma-led India clinched their first ODI series of 2023 after the Men in Blue scraped past Sri Lanka by four wickets in the second match of the three-match series at Kolkata’s Eden Gardens on Thursday.

Debutant Nuwanidu Fernando scored a gritty half-century but the visitors were restricted to 215, a target that India took 43.2 overs to chase down.

This was India’s second series win of the new year, after Hardik Pandya-led Men in Blue had clinched the T20I series against the same opposition last week.

With the series already decided with a game to spare, let’s now take a look at five talking points from the match:

Nuwanidu Fernando made his ODI debut on Thursday against India, and although teamwise, Sri Lanka failed to come out on top, it was still something of a night to remember for Fernando, as the 23-year-old notched up his maiden half-century in 62 balls.

Sri Lanka won the toss and opted to bat first. Fernando opened the innings with his partner Avishka Fernando, but the latter fell to Mohammed Siraj in the sixth over, with India’s score reading 29/1.

What followed was a 79-run stand with Kusal Mendis for the second wicket, and Mendis, and Dhanjanaya de Silva departed in quick succession to put the Lankans in a spot of bother at 103/3.

It was not long until Nuwanidu Fernando was dismissed in the 22nd over with the visitors’ score reading 118/4, and despite mini fightbacks from Wanindu Hasaranga (21), and Dunith Wellalage, nothing much went in Lankans’ favour.

In the end, as far as Sri Lanka’s batting was concerned, it was Nuwanidu’s innings that stood out.

KL Rahul back among the runs

KL Rahul might be fighting for consistency with the bat at the moment. Time and again, he has reminded the national selectors what he is capable of in the ODI format, and Thursday was yet another example of what he could do in crucial junctures of a match.

Rahul’s strike-rate of 62.13 might have been questionable, having taken 93 balls to get to his fifty, but the most important thing is that he played calmly under pressure, coming into bat at number five.

If their top-order batting in the first ODI was an example of dominant display, the top-order batters, however, failed to fire this time around at the Eden Gardens.

Having been set a target of 216 to chase down, Rohit Sharma could only manage 17 runs as he was edged and caught by Kusal Mendis, the Lankan keeper in the fifth over of the Indian chase.

Less than an over later, Lahiru Kumara got rid of Shubman Gill (21), while all Virat Kohli, who had scored a century in the previous ODI, could manage were four runs.

Shreyas Iyer (28) was also a victim of a dismissal after getting off to a start. But failing to convert it, with India reeling at 86/4, and credit must be given to where it is due, with KL Rahul turning the tables into India’s favour with a gritty knock.

Kuldeep Yadav was brought into the playing XI as a replacement for the injured Yuzvendra Chahal, and Yadav’s inclusion proved to be worthy, as he ended up with figures of 3/51 at Eden Gardens, where he has played several matches for Kolkata Knight Riders (KKR) in the Indian Premier League(IPL).

Kuldeep not only picked three wickets on Thursday, but also reached the milestone of 200 international wickets. Kuldeep now has 122 wickets alone, in the ODI format.

Kuldeep struck for the first time in the 17th over, getting rid of Kusal Mendis off an LBW, and went on to clean up skipper Dasun Shanaka, and a caught and bowled dismissal to see off Asalanka.

Kuldeep was adjudged Player of the Match, for his performance with the ball, as well as hitting the winning runs, finishing it up with a boundary.

Siraj, too, makes it count with the ball

Mohammed Siraj was influential with the ball as well, just like Kuldeep Yadav. With figures of 3/30 from 5.4 overs, Siraj enjoyed an economy of 5.29.

There will be competition heating up with the ODI World Cup slated to take place in India later this year, and it was Siraj’s chance to make it count.

He scalped two wickets in the series-opener, and on Thursday, he returned with three wickets.

Siraj drew first blood when he removed Avishka Fernando, cleaning up the batter with a wobble seam delivery, before coming back to haunt the visitors in the 40th over, where he struck twice.

Sri Lanka were already eight down by the 40th over, and it was just a matter of time. In the second ball of the over, Axar Patel at backward point made no mistake with the catch to remove Wellalage, whose punch eventually ended in vain. Just two balls later, Siraj cleaned up Lahiru Kumara, to finally see off the Lankan innings.

The second One Day International (ODI) between India and Sri Lanka saw several talking points being discussed. There were high expectations on India as they just won the first ODI and were keen to ensure a clean sweep. Sri Lanka, on the other hand, were keen to perform better than their last outing and put their stamp on India’s run.

The battle between two cricket stars – KL Rahul and Kuldeep Yadav was the highlight of the day. KL Rahul stayed unbeaten on 64 from 48 deliveries as he scored at a sensible run rate to help India to victory. His calmness and composure under pressure was commendable and he was aptly supported by Gautham Gambhir and Dinesh Karthik.

Sri Lanka started with a bang as they took early wickets to restrict India from posting a big total. But their efforts were countered by Kuldeep Yadav whose magical spell saw Sri Lanka’s innings crumble. He took four wickets for 41 runs and was the star performer for Indian Bowlers.

Overall, it was an exciting game that had some fantastic individual performances. India’s victory not only brings them closer to a clean sweep but also sets an example in the ongoing neighbourhood cricketing rivalry.