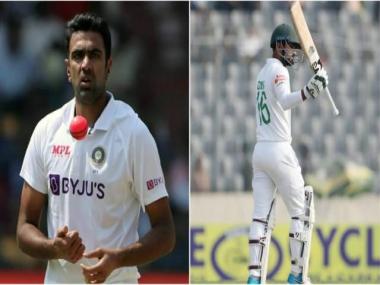 India all-rounder Ravichandran Ashwin recently had a long conversation with Bangladesh’s Litton Das during India’s tour of the country in December.
The two had met by the swimming pool before Day 4 of the second Test in Mirpur along with players of both teams, and Ashwin said he had thought Litton could reach the levels of Virat Kohli, Steve Smith, Kane Williamson and Joe Root, when he witnessed Litton play for Bangladesh for the first time.
“I told Litton Das that I saw him during his Test debut. I saw his style of play and thought here is a pathbreaker to take Bangladesh cricket forward. I told him ‘I have a small disappointment. I thought you will reach the level of Virat Kohli, Steve Smith, Joe Root, and Kane Williamson,” Ashwin had said.
Also Read:‘Imagine what you would do if India didn’t play’: Ashwin shuts off SL troll
Litton recently revealed his reply to Ashwin during the conversation.”I had a conversation with Ash bhai in the swimming pool during the second Test in Mirpur. He told me that when he saw me for the first time in 2015, he thought that I could reach the levels of all those players you mentioned. But I told him that things were different back then. I was young and the more you play cricket at the highest level, the more you grow,” said Litton, as per Sportstar.
“Secondly, we don’t play away series too often. Though we have played against New Zealand, we have not played a bilateral series in Australia, we don’t play too often in South Africa or in India or Pakistan. So, if you don’t play against top four-five teams on a regular basis, you won’t be able to grow as a cricketer,” added Litton.”That’s what I told Ash bhai. The Indian team plays regular cricket against Australia, England, New Zealand, so the players benefit.
Even during the IPL, the Indian players get an opportunity to play with these cricketers and when you play with top-level cricketers regularly, then you get to learn a lot,” said Litton, who has been acquired by Kolkata Knight Riders for IPL 2023.

Bangladesh batsman Liton Das recently shared his views on the importance of playing a majority of home games in the recent Asia Cup. In a media interview, he responded to Indian off-spinner Ravichandran Ashwin’s theory on achieving levels similar to that of the ‘Fab Four’ of cricket’s golden generation. He credited Bangladesh’s improvement in recent times to home games, stating that they don’t often play away series.

After playing a major role in the Asia Cup 2018, Das was asked to comment on Indian spinner Ashwin’s theory of the ‘Fab Four’. Ashwin insisted that the current generation of cricketers should focus on sharing knowledge on good pitches, just like the golden generation of Sachin Tendulkar, Jacques Kallis, Rahul Dravid and Brian Lara did in the 2000s.

In reply to Ashwin’s suggestion, Das said that the Bangladesh cricket team focuses more on home games as they do not often play away series. He made a valid point, saying that cricketing teams need to play at home to achieve success as the home conditions, pitches, and crowd would be an advantage. He continued, saying that playing in home conditions has enabled the Bangladesh cricket team to improve its performance in recent times.

The right-handed batsman shouldered much of Bangladesh’s hopes in the recently concluded Asia Cup 2018, with two important half-centuries. His response to Ashwin’s theory shows the deep understanding of the cricketing scenario which exists in the South Asian circuit.

It would be interesting to see if teams like Bangladesh take the lead from Das and invest more of their efforts in home-based games in the future. Surely, the ‘Fab Four’ of modern cricket would agree too.