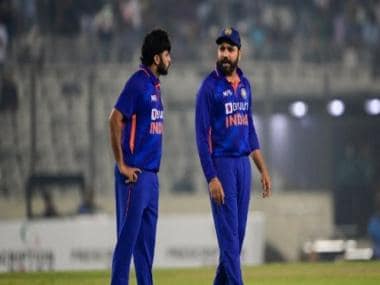 Despite a late blitz by India skipper Rohit Sharma, Bangladesh registered a narrow five-run win in a thrilling second ODI to take an unassailable 2-0 lead in the three-match ODI series at the Shere Bangla National Stadium on Wednesday.

Playing with a heavily bandaged left thumb, the gallant half-century from the Indian captain, who came in to bat at number 8, could not save India from a consecutive ODI series defeat in Bangladesh as Mustafizur Rahman defended 20 runs from the last over to secure a win for his team.

Comes back for the team

Walks in at No.9 in a run-chase

Speaking at the post-match conference, Rohit said that India have been poor with the ball in the middle and death overs.

“From being 69/6, allowing them to get to 270-odd wasn’t a great effect from our bowlers. We started well but the middle overs and the back end is what’s hurting us a lot. Happened in the last game as well. It’s something we need to work on. Not taking anything away from Mehidy and Mahmudullah, was a great partnership but we also need to find ways of breaking such partnerships,” Rohit said.

“In One-Day cricket, it’s about partnerships and when you get those, you have to ensure that they are converted to match-winning partnerships. That’s what they did. If you get those 70-run stands, you need to convert them into 110-120 run partnerships for the team to win games, as it isn’t easy for the new batter,” he added.

Notably, Mehidy Hasan Miraz and Mahmudullah steadied Bangladesh after an early shock with a 148-run partnership for the seventh wicket to post a challenging 271/7 against India.

Speaking about his thumb injury which he suffered while fielding, Rohit said, “It (thumb injury) isn’t too great. Some dislocation and some stitches. Fortunately, not a fracture and so, I was able to bat.”

Meanwhile, Bangladesh captain Litton Das said that he was elated to win his first series as a skipper.

“Very happy, to win in my first series as captain, it feels good. We felt that 240-250 was a good score. We were under pressure but they (Mahmudullah and Mehidy) were brilliant. Don’t know what their conversations were, but what they did was simply superb. I wanted to rotate my main bowlers around because it was a good pitch in the second half, so I couldn’t afford to bowl too many of my main bowlers early on. The focus for the next game will also be about winning,” Das said.