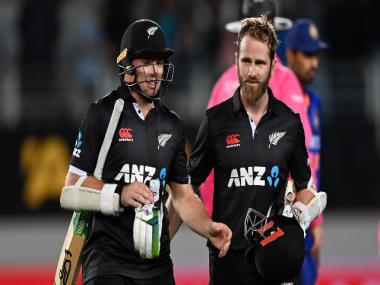 The Indian team got off to a shaky start in the ODI series against New Zealand on Friday, going down by seven wickets thanks to the brilliance of Tom Latham and Kane Williamson in Auckland.

The Men in Blue, who had suffered a disappointing exit from the T20 World Cup earlier this month, were served another reminder of the areas they need to work on in their preparation towards the 2023 ODI World Cup on home soil.

Latham and Williamson came to the rescue for the Kiwis after they had been reduced to 88/3 after being set 307 to win by the Indians, who are being led by Shikhar Dhawan in this series after Hardik Pandya captained them in the T20Is.

The senior pair stitched an unbroken 121-run stand for the fourth wicket, with Latham playing the aggressor and Williamson happy with a supporting role as the Indians failed to get a breakthrough once the two set themselves in.

Earlier, the Indian top three comprising stand-in skipper Shikhar Dhawan, Shubman Gill and Shreyas Iyer scored half-centuries and set the foundation for a big total for the visitors. Dhawan and Gill shared a 124-run opening stand before both departed in quick succession while Iyer stayed at the crease till the final over to ensure the team got past the 300-mark.

The game also witnessed the ODI debut of Umran Malik, who had made his T20I debut in the tour of England earlier this year. Malik dismissed in-form opener Devon Conway and Daryl Mitchell and touched speeds of up to 153 kmph during his lively spell.

With the opening game of the series coming to an end, we take a look at some statistics from the match:

— Tom Latham brought up his highest ODI score, going past his 137 that he had scored against Bangladesh in Christchurch in 2016.

— Latham’s unbeaten 145 is also the highest ODI individual score for New Zealand against India, going past Nathan Astle’s 120 in Rajkot in 1999.

— The unbroken 221-run stand between Latham and Williamson is the fourth-highest for New Zealand in ODIs as well as the highest for the fourth wicket.

— Shreyas Iyer brought up his fourth consecutive fifty-plus score against New Zealand in ODIs, the most by an Indian, going past MS Dhoni (3).