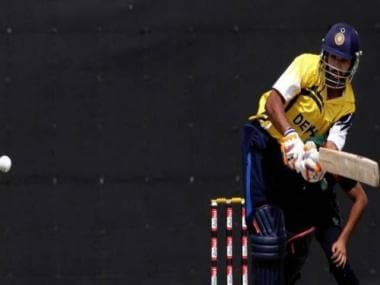 Shikhar Dhawan, Himmat Singh, and Yash Dhull hit half-centuries as Delhi defeated Meghalaya by eight wickets for their second successive win of the Vijay Hazare Trophy in Kolkata on Sunday.

Senior left-arm pacer Pradeep Sangwan, Shivank Vashisht, and Nitish Rana took a couple of wickets each to restrict Meghalaya to 216 for seven in 50 overs. Outstation player Punit Bisht top-scored with 75 off 80 balls.

Dhawan is getting some valuable time in the middle ahead of the series in New Zealand where he will captain a second-string Indian team. Veteran India pacer Ishant Sharma, who starred in the opening game against Vidarbha, did not play on Sunday.

In other Group B matches in Kolkata, Karnataka beat Vidarbha by 66 runs while Jharkhand beat Assam by eight wickets. Rajasthan defeated Sikkim by seven wickets.