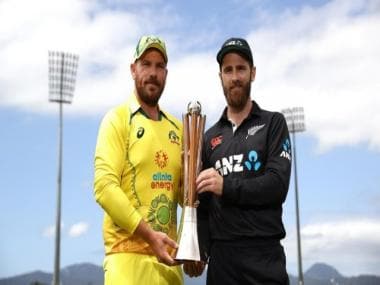 Result: New Zealand were bundled out for 82 while chasing 196 against Australia. The Australian side clinched a win by 113 runs and took an unassailable lead in the series.

New Zealand skipper Kane Williamson won the toss on Thursday and sent Australia in to bat as he chases a victory to level the three-match one-day international series in Cairns.

Australia won the series-opener by two wickets despite slumping to 44 for five chasing a target of 233. Allrounder Cameron Green played an integral role in that win with an unbeaten 89 and a 158-run sixth-wicket stand with Alex Carey but was still sore two days later and was rested for the 2nd ODI.

Top-ranked New Zealand also made one change, with Tim Southee returning to replace paceman Lockie Ferguson in the bowling attack.