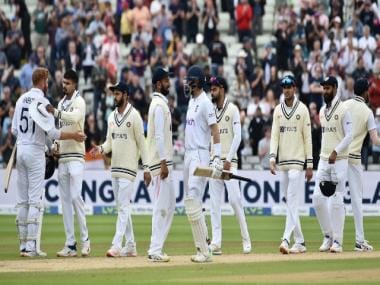 India slipped below Pakistan to fourth position in the World Test Championship standings after losing the fifth Test match against England at Edgbaston.

India lost the rescheduled and final match of the series by 7 wickets as the hosts chased down mammoth looking 378 quite comfortably. England levelled the series and gained 12 points on the table.

Meanwhile, India who had earned no points after losing the match, were docked of two more points owing to slow over rate in the fourth innings of the Test match.

Article 16.11.2 of the ICC World Test Championship (WTC) playing conditions, a side is penalised one point for each over. The Jasprit Bumrah-led side fell short by two overs and hence were docked two championship points.

With the loss, and after the deduction of two points, India’s percentage points came down to 52.08 percent from 58.33 percent. Pakistan having 52.38 percent edged India, albeit by a small margin. Australia and South Africa have still maintained the top two spots with 77.78 percent and 71.43 percent respectively.

England on the other hand have risen to 33.33 percent from 28.89 percent. However, the three lions are ranked seventh in the table despite of some marvellous performance in recent times.

Both the teams have completed four of the six designated series in this cycle so far and have two series remaining.

England will host the Proteas and will later tour Pakistan for their remaining two series.

India on the contrary will visit Bangladesh for a two-match series and subsequently host Australia for a four-match series.

India can reach the maximum to 68.06 percentage points in the current cycle if they manage to win the remaining six matches.

Earlier, India won the two-match series against New Zealand 1-0 and beat Sri Lanka 2-0 in home series. In their contest away from home, India have managed a 2-2 draw against England and lost 2-1 to South Africa in January 2022.

With Australia, South Africa and Pakistan each having three series left each (including the ongoing series between Australia and Sri Lanka), India’s qualification in the WTC Final—to be played in 2023—will largely depend on the outcome of other teams’ series.