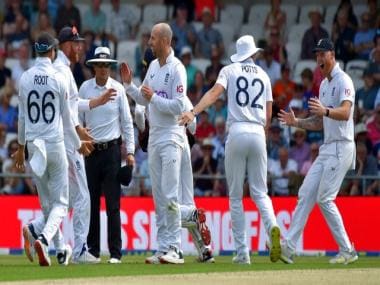 New Zealand batter Henry Nicholls got out in one of the most bizarre manners in the third Test match against England in Leeds on Thursday of Jack Leach’s bowling.

The ball ricocheted off the non-striker Daryl Mitchell’s bat and flew to mid-off where Alex Lees completed an easy catch. The dismissal left everyone on the field including Jack Leach surprised. Even the fans went crazy as the video started doing rounds of social media in no time.

Nicholls was batting on 19 of 99 balls in the 56th over of the first innings. Nicholls came down to a half volley delivery and punched a straight drive with some power. Mitchell tried to get out of the way but did not have enough time. The ball hit the middle of Mitchell’s bat and went straight to Alex Lees who was fielding at mid-off. Leach was in utter shock looking at the proceedings, even as his teammates started to celebrate.

Even the umpire tried to get out of the way but was luckily unhurt. “He’s gone. How has it got there? How has it got there? Leach has no idea,” exclaimed Naseer Hussain who was commentating then. “Mitchell is at the non-striker’s end. He’s trying to get his bat out of the way, the umpire is diving out of the way and Lees is aware. Ahh! Mitchell’s middled it straight to mid-off. I cannot believe, I really can’t,” Hussain further screamed as the broadcasters showed replays of the dismissal. It was an unfortunate way of getting out, but nothing that would prove to be violating the law. Law 32.2.2.3 provides, “It will be out if a fielder catches the ball after it has touched the wicket, an umpire, another fielder, a runner or the other batter.”

New Zealand ended the day with 225 for the loss of five wickets. They had lost the five wickets for 123, but Mitchell steadied the innings along with Tom Blundell, making a century stand for the sixth wicket. Mitchell who has been the batting mainstay for the Kiwis throughout the series, once again top scored with 78*.