WHAT A MATCH! We had a Buttler ton. Shreyas played a brilliant knock of 85. Chahal then bowled a game changing over with four wickets including a hat-trick and then debutant Obed McCoy defended 11 runs in the last over, picking up two wickets to win it for RR.

OUT! Obed McCoy wins it for RR. Cleans up Umesh. RR win by 7 runs. Good length delivery on middle, Umesh goes for a swing across the line but misses. The ball rattles the timber. What a debut for him.

Single! Full and slower on the pads, Chakaravarthy tucks it to the leg side and takes a single. Right Umesh on strike. 8 needed off 3!

TWO RUNS! Jackson heaves it to the leg side, doesn't get it off the middle and they run for two. 9 needed off 5.

Obed McCoy to bowl the final over. Jackson on strike. 11 needed off 6 balls!

DOT BALL! It's very full and WIDE outside off, from Prasidh, looked like it went out of the guideline, Umesh can't reach it. The umpire doesn't signal a WIDE. 11 NEEDED OFF 6.

TWO SINGLES OFF TWO BALLS. Umesh squeezes it to deep backward point for a single. Jackson then smacks a full toss straight to deep extra cover for another single. 11 needed off 7.

One run! Very full outside off, Jackson guides it to deep backward point for just a single. 14 needed off 9

Ouch! Umesh absolutely smockes it back, Jackson somehow manages to get his glove before his helmet and avoids it hitting the helmet. They run through for a single.

This match is still alive. What an over for KKR. Umesh unleashes a stunning counter attack. Hammers 2 sixes and a four. 20 off the over. 18 needed off 12 balls.

FOUR! Wow this is some attack from Umesh. Umesh cracks it through covers, off Boult and it races away. 19 needed off 13.

SIX! 2nd in the over! Umesh hammers another full ball over long on, off Boult. 23 needed off 14!

SIX! Umesh smacks it straight down the ground, off Boult. 31 needed off 16!

A game changing over. Chahal gets four wickets including a hat-trick and gives away just 2 runs.

OUT! HAT-TRICK FOR CHAHAL. Pat Cummins is caught behind. WHAT AN OVER! It's a quicker one, outside off, spins away after landing. Cummins comes forward for a push but ends up edging it to the keeper. They all set off in wild celebrations.

OUT! MASSIVE WICKET! Chahal traps Shreyas Iyer LBW. The umpire raises his finger. Shreyas opts for a review but replays show three REDS as it's hitting the leg stump. It's full on the leg stump, Iyer looks to heave it over the leg side but misses. Gets hit on the back leg. THREE REDS.

OUT! The googly does the trick again. Chahal has Venkatesh Iyer stumped. Loopy and full outside off, Venkatesh Iyer charges down the ground for a loft, but is beaten by the away turn. He misses and the keeper clips the bails off.

A good comeback from Boult in that over. After a single, Iyer hit him for a SIX over point. Boult then conceded four singles off the next four balls. 11 off the over. 40 needed off 24.

SIX! Cracked away. Short and wide outside off from Boult, Shreyas Iyer slashes it over backward point.

An eventful over that. Samson dropped Iyer and he rubbed salt on the wounds but hitting a SIX and a FOUR. 15 off the over. 51 needed off 30.

FOUR! Not off the middle but still effective. Iyer heaves, gets the inside half of the bat, but the power in the shot takes it to the ropes.

SIX! Lovely from Shreyas! Full on middle and leg, Shreyas just flicks it over deep square leg. 56 needed off 32!

DROPPED! Samson drops Shreyas Iyer. Short and down the leg side, Iyer looks to pull but ends up gloiving it. Samson dives to his left but spills it.

Brilliant over from Ashwin, gets the HUGE wicket of Russell and gives away just 4 runs.

OUT! R Ashwin gets the BIG one. Cleans up Russell with a carrom ball. A flatter carrom ball on middle, spins away, squares Russell up and beats his outside edge. Rattles the timber.

A mixed but successful over for RR. Rana started the over well with a FOUR and a SIX after surviving a DRS review which was an umpire's call.  He then mistimed one to deep mid-wicket for three. After a single Chahal had his man as he had Rana caught at long on with a googly. 14 runs and a wicket off the over.

OUT! Chahal has his man. Rana holes out to long on. It's that googly outside the leg stump, Rana looks to clear long on, doesn't get it off the middle and helps it into the hands of Buttler at long on.

FOUR and SIX! Good use of the feet, Rana charges and cracks it straight down the ground for FOUR. He comes down again and hammers it over deep mid-wicket for a SIX.

NOT OUT! Rana goes for the reverse sweep but misses and gets hit on the back leg. The LBW appeal is turned down. Samson opts for a review but replays show the impact was umpire's call and it was clipping the stumps.

A mixed couple of overs for RR. Chahal bowls a good over and gives away just seven runs. It was turning out to be a good over from Ashwin, he concedes just three runs off the first four balls but then Iyer spoils it with a MASSIVE SIX. And then pulls one to long leg for two. 11 off the over. 84 needed off 48.

SIX! MASSIVE! Iyer charges down the track and clobbers it over long on.

A decent over for KKR. Ashwin had a chance to run Rana out as Iyer drove one straight back, Ashwin fielded it and didnt' flick it back onto the stumps, had he scored a direct hit, Rana would have been a goner as he was way outside his crease. Iyer hit a reverse sweep six in that over as they scored 9 off it.

FIFTY for Shreyas Iyer. He gets there off 32 balls.

SIX! Brilliant from Iyer. Gets down and reverse sweeps it over backward point, off Ashwin.

OUT! Prasidh Krishna breaks the partnership. Finch is caught at third man. Short outside off, Finch goes for the upper cut, doesn't get it off the middle. Karun Nair at third man takes a good catch.

FOUR! Poor delivery from Prasidh. Full toss outside off, Finch guides it wide of backward point.

FOUR! FIFTY for Finch. He brings it up off just 25 balls. Finch gets across and swipes it wide of short fine leg.

Another HUGE over for KKR. Finch is looking in great touch. After A couple of singles and a WIDE, Iyer flicks one through the leg side for three. Finch then gets a top edge for four. And then lofts the next down the ground for a SIX. He then flicks one through the leg side for a couple to make it 19 off the over. There were a couple of WIDES in that over.

FOUR and SIX! Short outside off from McCoy, Finch goes for the pull but gets a top edge over the keeper. He then gets on off the middle as he lofts one effortlessly straight down the ground for a SIX.

This is good stuff from KKR. They have gone on a brilliant counterattack. Finch hammers a couple of powerful fours and then lofts another one wide of long on for three FOURS in the over. 17 off the over.

FOUR! Another powerful shot. Tossed up on middle from Chahal, Finch hammers it straight back down the ground.

FOUR! Sheer power. Finch smacks it to long on, off Chahal.

Iyer and Finch have gone on the counterattack after Narine's dismissal. A decent PP for #KKR – 57/1. Iyer gives himself room and cuts one through point off Ashwin and then Finch lofts one over wide long off for a six. 14 off the over. A decent one.

SIX! Finch is finding his groove. Stays in his crease and lofts it over wide long off, off Ashwin.

FOUR! Nicely done by Iyer, gives himself room and cuts it wide of point, off Ashwin.

R Ashwin into the attack now…

A good over for KKR. Finch and Iyer got a couple of FOURS. Iyer squeezed one wide of short third man while Finch smashed one over point. 12 off the over.

Rajasthan Royals vs Kolkata Knight Riders Live update – Tata IPL 2022 RR vs KKR Live cricket score, 30th IPL Match Live Coverage: Obed McCoy wins it for RR. Cleans up Umesh. RR win by 7 runs. Good length delivery on middle, Umesh goes for a swing across the line but misses. The ball rattles the timber. What a debut for him.

Preview: Both Rajasthan Royals and Kolkata Knight Riders will look to shrug off their last defeat and get back to winning ways when they meet on 18 April. The exciting contest will take place at Mumbai’s Brabourne Stadium. 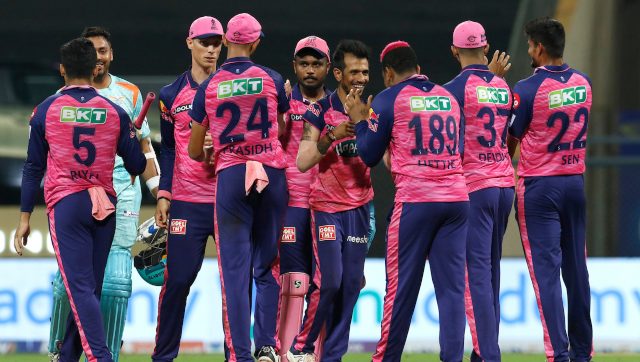 While Rajasthan lost their last game against Gujarat Titans by 37 runs, KKR fared no better against a resurgent Sunrisers Hyderabad. A victory for either side can help them maintain their spot in the top four of the point table.

When will the Rajasthan Royals and Kolkata Knight Riders match be played?

Where will the Rajasthan Royals and Kolkata Knight Riders match be held?

The RR vs KKR IPL 2022 match will be held at Brabourne Stadium in Mumbai.

What time will the Rajasthan Royals and Kolkata Knight Riders match start?

Where can you watch RR vs KKR IPL 2022 match on TV and online?

You can also follow firstpost.com to check out the live scores and commentary of the RR vs KKR IPL 2022 match.