That was poor fielding effort from Moeen Ali. Dwayne Bravo got Quinton de Kock to drive, on the up, and it has been let go by Moeen at mid-off. That is routine at this level. How much will CSK have to pay for that?

Pretorious comes in and falls for a golden duck. Appeal for leg before from Tye but umpire turns it down. LSG decide to review. There is no bat on it and it is going to hit leg stump after pitching in line with the stumps

Jadeja looks to continue to find the boundaries but this time he is holed out in the deep. Flicked off the legs once again, but Pandey completes the catch with ease. Tye strikes

LSG vs CSK Live Cricket Score Online: Low full toss from Tye and Jadeja plays it off his pads through backward square. That brings up 200 runs for CSK

LSG vs CSK Live Cricket Score Online: An open faced slice from MS Dhoni this time. Full, outside off, Dhoni opens the face of the bat and carves the region near backward point

LSG vs CSK Live Cricket Score Online: Banged in short by Avesh Khan and MS Dhoni doesn't take time to get going. THRASHED over extra cover and this has gone the distance. Into the stands she goes!

Shivam Dube was hitting the ball well and cleanly. He wanted to continue that flow of runs but perishes instead. It goes high but doesn't have the distance to clear the boundary rope. Avesh Khan strikes and Lewis completes the catch. Avesh pats Dube's back as he walks back

LSG vs CSK Live Cricket Score Online: SIX! Dube draws himself closer to the 50-run mark with that six. He rocks back and hoists it over backward square. This has gone towards the 80 metre boundary and cleared it well

LSG vs CSK Live Cricket Score Online: Consecutive boundaries for skipper Ravindra Jadeja. Having collected four off the last ball of the Bishnoi over, he adds four more from this Chameera delivery. Short and perfect timing! Pulled in front of square for a boundary

BOWLED! Rayudu got away with a heave on the previous ball, collecting four leg byes, but this time the swipe misses completely. Tries to thrash it to leg side but misses and Bishnoi plucks out the leg stump

Chennai Super Kings (CSK) Live Score: WHAT. A. HIT. A ball after almost losing his partner, Rayudu darts down and picks the ball up early and thrashes it, absolutely pummels it down the ground. Almost broke the window pane in the commentary booth!

Chennai Super Kings (CSK) Live Score: DROPPED! Uh-oh! That is a miserable effort from Chameera inside the circle. Full toss from Krunal, could well have been a no ball, Dube pulls it to short backward square and this comes out of the fielder's hands. Very ordinary effort that!

Chennai Super Kings (CSK) Live Score: Over the wicket and too much width from Krunal to Dube and it has been thrashed in front of square. Avash with a big dive but it doesn't prevent the four

Ambati Rayudu slams it for a six! He comes down the track to a short delivery by Andrew Tye and spanks it over the wide long-on boundary. Tye can only afford a wry smile as the ball clears the fielder at the rope

At the end of 14 overs, CSK are 136/3. That early momentum has been lost just a touch but Shivam Dube doing his best to keep things going. He thrashes 12 runs from the Hooda over and 6 runs coming from this one by Krunal

Chennai Super Kings (CSK) Live Score: THIS IS SENT INTO THE STANDS! Good length delivery and it has been powered through the line and goes into the long-off stand

Dube rocks back and slaps this delivery from Hooda in the deep cover region for a four. A misfield doesn't help!

Robin Uthappa is trapped leg before by Ravi Bishnoi and he walks back after a blazing 50 from 27 balls. Bishnoi asks KL Rahul to review this after umpire says not out. The delivery skid across and beat the edge to hit the front leg. Ball tracking says it would have hit middle and leg stump

FIFTY! Robin Uthappa brings up his 50 from 25 balls. This is his 26th IPL fifty 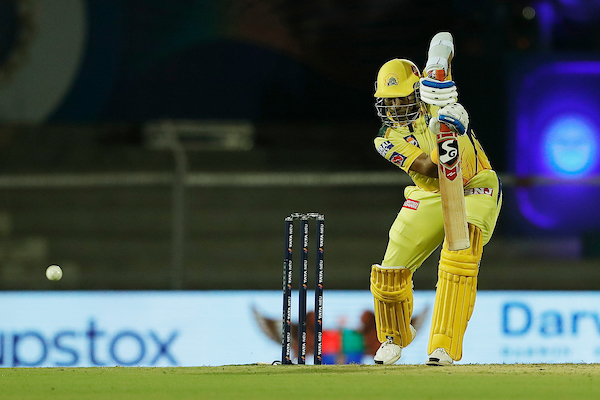 At the end of the powerplay overs, CSK are up to 73/1 with Robin Uthappa the chief architect behind majority of the runs. Ruturaj Gaikwad only adding 1 to the scoreboard before perishing. Moeen Ali has joined in and taken Krunal Pandya to the cleaners with 16 runs coming off the sixth over

IPL 2022, LSG vs CSK LIVE Cricket Score: This is brutal stuff from Moeen Ali but not much on offer from Krunal Pandya. Length ball, Moeen waits for it and drags the pull across the line

IPL 2022, LSG vs CSK LIVE Cricket Score: Next ball, SIX! Full on middle stump, Moeen goes down on one knee and flicks the sweep over deep square leg

IPL 2022, LSG vs CSK LIVE Cricket Score: Moeen Ali joins in and takes the attack on Krunal Pandya. Length on middle stump, Ali drives it and pierces the gap

IPL 2022, LSG vs CSK LIVE Cricket Score: And the over ends with what else but a boundary. This one is a length ball, Uthappa swivels and pulls it right of deep backward square for another boundary

IPL 2022, LSG vs CSK LIVE Cricket Score: Robin Uthappa continues to deal in boundaries. Andrew Tye offers width on first ball, bowls outside off on the second and middle stump on the fourth. All sent away for boundaries!

Mooen Ali is the new man in for CSK after the dismissal of Ruturaj Gaikwad. The CSK opener looked to take a quick single but paid for the indecision from the other end. Ravi Bishnoi hitting the bullseye! Robin Uthappa is off to a flier at the other end

RUN OUT! Ruturaj Gaikwad walks back! Big appeal for leg before, umpire says no. Gaikwad tries to steal a single but he's sent back and is miles out of the crease. Perfect direct hit by Ravi Bishnoi and CSK have the first wicket

LSG vs CSK Live Score: Another expensive over comes to an end. 12 runs from it as Uthappa collects four more, coming off the last ball. Flicked once again by Uthappa and this one goes over the square leg umpire

LSG vs CSK Live Score: First maximum of the night comes from Robin Uthappa's bat! Beautiful timing. Uthappa flicks behind square for a six as Chameera gets his line all wrong

Second ball, FOUR! This one is outside off, width on offer and Uthappa opens the face of the bat to guide the ball past point

First ball, FOUR! Avesh Khan with poor line on the first ball of the match and is duly dispatched for a boundary. All timing from Uthappa

KL Rahul: "Going to bowl first. At the end of the day we need to play good cricket as well. But have been watching the last few games, ball gets wet towards the end. Also this looks like a fresh wicket with some grass on it. Enjoyed the last game that we played. Boys showed good fight. Showed real character. Was pleasing for us and will take confidence from that. One change – Tye comes in, Mohsin misses out."

Ravindra Jadeja: "Would've bowled first too. Now we're batting so will look to put up a decent score. Blessed with a huge fan following. Three changes – Moeen is back, Milne has a sidestrain so going with three overseas."

Graeme Swann with the pitch report: "What we saw in the first match here was a bit of extra bounce troubling the batters. That's something the bowlers will look into. Wickets came off short-pitched bowling. This pitch has had a bit of water put on it since the other day. It's definitely greener. Reckon it's not quite as hard. Wouldn't be surprised if it's a good batting wicket, but the seamers but just get a little bit if they pitch it up, might just nibble off a length"

Who is Ayush Badoni?

One of the star attractions from LSG's defeat to GT was Ayush Badoni. He scored 55 from 41 balls and raised questions, including Harsha Bhogle's, "Where have you been hiding?" [A profile of the youngster]

In their first IPL game ever, Lucknow Super Giants lost out to fellow debutants Gujarat Titans by 5 wickets. LSG put together 158/6 from the allotted overs with Deepak Hooda and Ayush Badoni notching fifties. Gujarat chased the target down with 2 balls to go. Dushmantha Chameera picked two wickets for LSG

CSK started IPL 2022 with a 6-wicket defeat against KKR. Chennai Super Kings scored 131/5 from 20 overs with MS Dhoni scoring an unbeaten half century. In reply, Kolkata Knight Riders chased the target down with 9 balls and 6 wickets to spare. For KKR, all batters reached double digits while Dwayne Bravo picked three wickets.

Preview: Chennai Super Kings will welcome the return of star all-rounder Moeen Ali as they eye a much improved batting performance in the IPL clash against Lucknow Super Giants in Mumbai. Both the teams come into the game after a loss in their respective opening matches. A common factor in their defeats were the failure of the top-order and they would be looking to correct that at the Brabourne Stadium. [Read]

Marcus Stoinis, Jason Holder and Kyle Mayers are unavailable for LSG. Over in the CSK camp, Deepak Chahar is the only player not available for selection.

Lucknow Super Giants played their maiden IPL game against Gujarat Titans on Monday. However, it did not turn out to be a successful attempt as they were pipped by Gujarat Titans in the final over.

Chennai Super Kings too had a poor start against Kolkata Knight Riders in the first match of this season. They could only post 131 for 5 and the only positive for them was the form of MS Dhoni, who scored a half century.

When will the Lucknow Super Giants and Chennai Super Kings match be played?

Where will the Lucknow Super Giants and Chennai Super Kings match be held?

The LSG vs CSK IPL 2022 match will be held at Brabourne Stadium, Mumbai.

What time will the Lucknow Super Giants and Chennai Super Kings match start?

Where can you watch the LSG vs CSK IPL 2022 match on TV and online?

You can also follow firstpost.com to check the live scores and commentary of the LSG vs CSK IPL 2022 match.