Toggle between the tabs above to switch between quick scorecard, full scorecard and ball-by-ball commentary

Day 3 Lunch report: England claimed three wickets after a bright West Indies start as the home side stuttered to 71 for three in reply to the tourists’ first innings total of 204 at lunch on the second day of the third and final Test on Friday.

A bright opening partnership of exactly 50 saw the hosts in the early ascendancy but the complexion of the morning changed dramatically with the dismissal of Kraigg Brathwaite by Ben Stokes in the second hour.

That was followed by the demise of new batsman Shamarh Brooks to Saqib Mahmood. 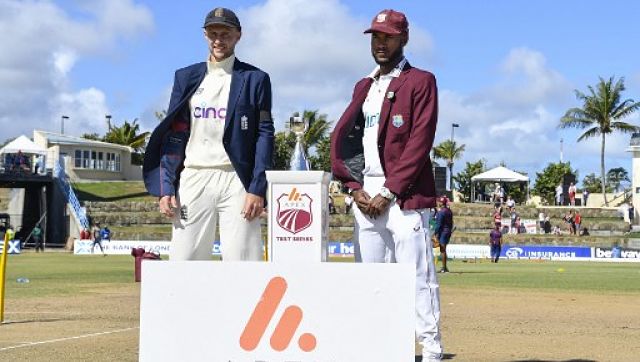 When the other opener John Campbell, who had survived a torrid examination from Craig Overton, fell to the same bowler just before the interval, England were in much better heart than midway through the session when the openers looked very comfortable on a pitch expected to encourage the faster bowlers.

Brathwaite, a virtual immovable object in the previous match in Barbados where he faced more deliveries than ever before by a West Indies batsman in Test cricket, looked in similar mood as Campbell did most of the scoring at the other end in bringing up the half-century stand.

But it took a delivery from Stokes which barely got off the ground to remove him as he was trapped plumb leg-before for 17 off 56 deliveries.

Brooks looked comfortable in his early moments at the crease, stroking two boundaries before he also became an lbw victim, Mahmood getting a delivery to skid through on the right-hander to send him on his way for 13.

Campbell found Overton to be his greatest challenge, eventually succumbing to the pacer.

Twice the left-hander was struck on the helmet and though he resumed his innings both times, he never looked settled against the continued hostility of his opponent, eventually gloving another lifting delivery on the body down the leg-side for wicketkeeper Ben Foakes to take the catch and end his effort on 35.

Nkrumah Bonner and Jermaine Blackwood will be the pairing to resume the contest for the West Indies after lunch with England keen for their faster bowlers to continue to exploit a helpful surface in defence of a modest first innings total.

With inputs from AFP