Toggle between the tabs above to switch between quick scorecard, full scorecard and ball-by-ball commentary 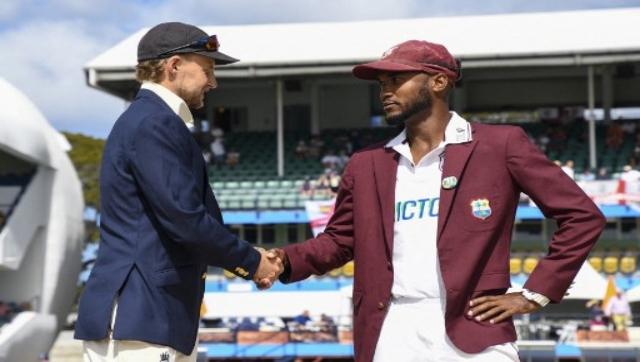 After three days of the second test, only 13 wickets have tumbled on the flat pitch at Kensington Oval.

Brathwaite and Blackwood showed acute patience to frustrate England in a stand of 183 that started before lunch and ended only five overs from stumps.

Brathwaite was 109 not out after batting the whole day, and nightwatchman Alzarri Joseph on 4.

Blackwood made a chancy 102, coming in after England prised out a couple of wickets in the morning.

Shamarh Brooks, resuming with Brathwaite, was edgy against England spinner Jack Leach and beat himself with a poor shot off Leach straight to point. Brooks added only eight runs and was out for 39 off 105 balls.

Nkrumah Bonner, the centurion in the first test in Antigua, was trapped by Ben Stokes on 9 and wasted a review, and the West Indies was 101-3.

Blackwood was almost the fourth wicket for an England attack with two new bowlers and the confirmed loss of spearhead Mark Wood. He was returning home with a right elbow injured in the first test.

Stokes trapped Blackwood before he scored but agreed with the umpire that it was not an out. Video, however, showed the ball hitting leg stump. Blackwood survived an actual review on 4, then cruised to lunch.

In a middle session they dominated, Brathwaite followed his fastest test fifty in Antigua with his slowest in Barbados when he needed 167 balls. Blackwood also got to his half-century right on tea.

After the break, Brathwaite serenely reached his 10th test century after running two. It took him 278 balls, and came less than a month after he scored 276 for Barbados on the same ground.

Blackwood was yorkered by debutant Saqib Mahmood on 65, but England’s new fast bowler over-stepped and committed a no ball. Blackwood didn’t waste the let-off, achieving his third test century and second against England with a single wide of the sole slip. He needed 207 balls.

But it was the West Indies’ day.

With inputs from AP