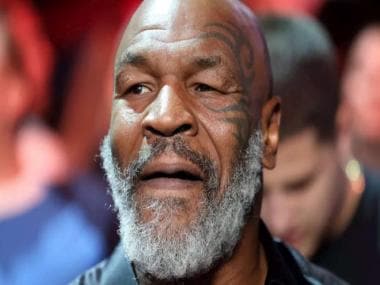 Legendary boxer Mike Tyson was pictured at an airport in a wheelchair, leaving the world wondering what is ailing him. He has now revealed that he is suffering from a debilitating health condition, sciatica.

It’s a nerve-impacting ailment that makes him unable to talk sometime. “I have sciatica every now and then, it flares up. When it flares up, I can’t even talk. Thank god, it’s the only health problem I have,” the 56-year-old former heavyweight champion told Newsmax TV in a recent interaction.

Sciatica is a condition used to describe nerve pain in the leg that is caused by compression or irritation of the sciatic nerve, which runs from your lower back to your feet.

The sciatic nerve is the body’s longest and one of the most important nerves. It has an impact on the person’s ability to control and feel the legs.

Sciatica is a symptom caused by an underlying injury to the sciatic nerve or an area that affects the nerve, such as the vertebrae, which are the bones in the neck and back, according to Healthline. It is caused by a herniated or slipped disc, spondylolisthesis, muscle spasm, spinal stenosis, degenerative disc disease or an overgrowing bone which pressurises the nerve.

The condition leads to a burning sensation and shooting pain in the lower back and radiates down to the thigh, leg or feet, sometimes making it difficult for people to walk. It may be accompanied by numbness.

It usually affects one leg. Both legs are rarely affected, according to a health website called Spine Health. The pain might worsen while sitting, trying to stand up, bending forward, twisting, lying down, and/or coughing and sneezing.

If not treated for long, the condition can lead to permanent neurological damage and impact one’s ability to talk. “…sometimes it increases the chances of developing Parkinson’s disease, behaviour change, Bell’s Palsy, Alzheimer and epilepsy,” Deeksha Katiyar, physician, at WeClinic Homoeopathy, told indianexpress.com.

Can it be treated?

Yes, from home remedies to medicines, treatment is available for sciatica. However, lying in bed or stopping activities can worsen the condition. Standing for more than 40 minutes is also not recommended.

The United Kingdon’s National Health Service warns against sitting or lying down for longer periods. “Even if moving hurts, it’s not harmful and can help you get better faster,” it says.

Hot and cold treatments, stretching, regular exercise, and physiotherapy can improve the condition within four to six weeks. Doctors might prescribe muscle relaxants and pain relievers.

Surgery may be needed for severe pain or situations in case a patient has lost control of bowel and bladder or has developed weakness in certain muscle groups of the lower extremity, according to Healthline.

How bad is Mike Tyson’s condition?

In the interview with Newsmax TV, ‘Iron Mike’ clarified that he has sciatica now and then. “When it flares up, I can’t even talk! Thank God it’s the only health problem I have. I’m splendid now,” he said.

“Everybody in my house is truly blessed and we’re all very grateful for whatever we have.”

Tyson appears to be suffering from complications related to his back.

“Me I go throught the underground garages. Its a presidential suite, on deposit” pic.twitter.com/R7fcfKeq6n

He was forced to retire in 2005 because of back-related health problems. He also suffered a knee injury later in his career.

On his Hotboxin podcast Tyson once said that he did not believe he had long left to live, reports Daily Mail. “We’re all gonna die one day of course. Then, when I look in the mirror, I see those little spots on my face,” he said.

“I say, ‘Wow. That means my expiration date is coming close, really soon.”